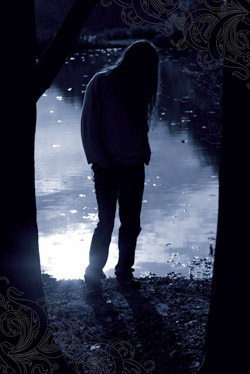 Alexander Paul Blake, frontman and leader of the band Eden Weint Im Grab, launches a solo career. In the gloomy hours of autumn and winter the Berlin-based artist created the debut album “Die Rückkehr ins Goldene Zeitalter” (engl. “The Return To The Golden Age) in his studio. The twelve track record contains natural mystic Black Metal with German lyrics with influences ranging from Folk to Doom. “I always had a kind of romantic idea of Black Metal”, comments the multi-instrumentalist. “This music touches me the most when it has a natural mystic mood, lyrical depth and an archaic magic – that’s exactly what I tried to capture with this album.” The tracks combine infernal furiousness with quiet, idyllic acoustic parts, which unites the extremes of nature in a musical context. The lyrics are inspired by the spirit of romanticism, the poetry of Georg Trakl and Henry David Thoreau’s novel “Walden”.

Recently Alexander Paul Blake has signed a record deal with the German label Einheit Produktionen, which will release “Die Rückkehr ins Goldene Zeitalter” April, 27th 2012. The first edition will also be released as a Digipak limited to 1000 pieces.

Hot News: An archaic journey into the depths of the forests – Alexander Paul Blake offers gratis download of “Waldkathedrale”