Canadian blackened death metal trio NECRONOMICON have just unveiled a sinister, cinematic video clip for the title track of their current album “Rise Of The Elder Ones“. The uncensored version is now being premiered as a worldwide exclusive with Terrorizer (UK).

“Rise of the Elder Ones” was released in June, 2013 and is still available via the Season of Mist e-shop. Artwork and tracklist can be viewed below: 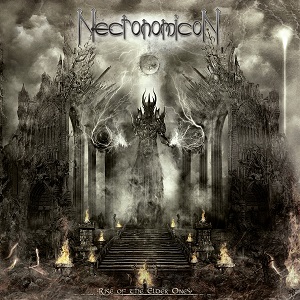 Tracklisting
1. Resurrected
2. The End of Times
3. The Living God (Pharaoh of Gods Part II)
4. The Nuclear Chaos
5. From Beyond
6. Rise of the Elder Ones
7. The Valley of the Lost Souls
8. Celestial Being
9. Dark Corners of the Earth
10. The Fallen

The hunters of the shadows have returned. NECRONOMICON conjure epic images of forbidden sights and dark madness with their fourth full-length “Rise of the Elder Ones”. The Canadians fuse the relentless onslaught of DEICIDE and SUFFOCATION with the massive dramatic sense of BEHEMOTH and DIMMU BORGIR, while adding a sinister and heavy melodic approach associated with the Stockholm school of death metal into their own crushing sound. “Rise of the Elder Ones” witnesses NECRONOMICON fine-tuning their style to perfection as a new peak in a career that began as early as 1988 with the founding of the band by guitarist and singer Rob “The Witch” Tremblay in the deep northern part of Canadian province Quebec, called the “Fjord of Saguenay”. NECRONOMICON always put quality before quantity and accordingly took their time before releasing any material. The first sign of unholy activity was a demo entitled “Morbid Ritual” (1992), which quickly spread through the underground. “The Silver Key” EP (1996) established their fast growing reputation firmly on the national map, before the eagerly awaited debut album “Pharaoh of Gods” (1999) became a modern classic over the years as its eerie amalgamation of brutal dark metal and ambient atmospheres was ahead of its time. Although having taken their name and occult inspiration from the famed literary invention of American master of weird horror fiction H. P. Lovecraft, NECRONOMICON followed up with a tribal concept album “The Sacred Medicines” (2003) based on American Native myth featuring the “Red Bull” singers from Western Canada’s Cree Nation on the title track. Having relocated to Montréal and thoroughly conquered their homeland, NECRONOMICON turned their somber attention towards the outside with the first international release “Return of the Witch” (2010). And the world responded with invitations to prestigious festivals such as Inferno (Norway), Ragnarok (Germany), and the Barge to Hell metal cruise among others. The trio also shared stages with well established acts such as CRADLE OF FILTH, DIMMU BORGIR, BEHEMOTH, and MORBID ANGEL, to name but a few. Now NECRONOMICON are about to bring their lurking musical vision into more dangerous and sinister and dimensions than ever. It is time for us mortals to finally witness the “Rise of the Elder Ones” and bow before their unspeakable might!

Necronomicon – “I Bringer of Light” dalpremier

NECRONOMICON – Pathfinder… Between Heaven And Hell

NECRONOMICON – The Return Of The Witch