New York vets DEHUMANIZED and Comatose Music have teamed up with NefariousRealm.com for an exclusive premier of the song “Root of Evil” off the band’s long-awaited return to action, Controlled Elite.

The song, which features a guitar solo from SUFFOCATION’s Terrance Hobbs, is now streaming at this location.

Controlled Elite is set for a November 27th release date and pre-orders for are now being taken at www.comatosemusic.com.

The history of DEHUMANIZED dates back to the mid-90s, an era that saw the rise of several legendary New York death metal acts, not the least of which included SUFFOCATION, INTERNAL BLEEDING, and PYREXIA. In 1998 DEHUMANIZED released their debut album Prophecies Foretold. The album was a savage crash course into the classic style of New York slam death metal. As a result of this impressive release they are now considered by many as one of the bands who helped define and shape the undeniable sound and feel of New York death metal. After reforming last year, DEHUMANIZED inked a multi-album contract with Comatose Music and have since been bulldozing their way back onto the US death metal scene. Controlled Elite was recorded at Full Force Studio in Long Island, NY and engineered by Joe Cincotta. 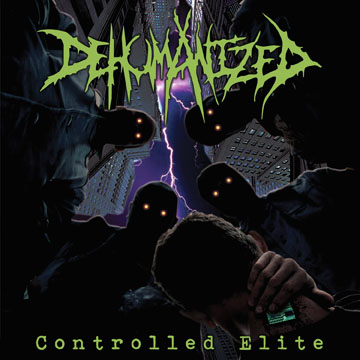