The anticipated new album from Italy’s Black/Rock/Doom Metal outfit FORGOTTEN TOMB will be released on the 30th of October in Europe andon the 6th of November in North America. Cover artwork, track-list and album overview are available below. 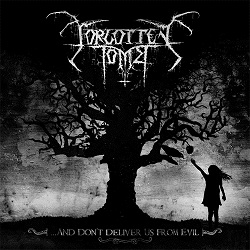 …And Don’t Deliver Us From Evil is the title of the 6th full-length album from Italy’s FORGOTTEN TOMB. More powerful and straight to the point, the album begins where it’s antecedent – Under Saturn Retrograde – melodically ended. The directions  of the new release may vary however over the last year’s offering, as the band submerges into more dark, horror-like regions and underground scenery, serving us a more steady and mature recording. FORGOTTEN TOMB is still obscure, melodic and still follows its own negative path – continuously experiencing with sound and imaginativeness.  But as fans of the formation may already know, the Italian outfit is likely to surprise the listener during the long and complex compositions, smuggling mainstream-music elements and wise song-structures into the outwardly seamy and fearsome metal landscapes, making the obvious music sub-genres sound not that obvious any more.
According to the leader and songwriter Ferdinando ‘Herr Morbid’ Marchisio, this new album is the most personal one he has written since 2004’sLove’s Burial Ground and it explores the darkest corners of his mind like never before, making it without any doubt one of the band’s more tortured and twisted offerings.
The album was recorded in Elfo Studio (Italy) by Daniele Mandelli (Love’s Burial Ground, Negative Megalomania, Songs To Leave, etc.) and mastered at Finnvox Studios (Impaled Nazarene, Amorphis, Children Of Bodom, Finntroll, HIM).

…And Don’t Deliver Us From Evil will be available as a regular jewelcase CD, limited to 1000 copies digipack CD with exclusive bonus track, digital download and double 12″LP with an alternative bonus track. First 66 copies will be available on a multicolour splatter vinyl. The album can be pre-ordered at: http://www.agoniarecords.com/index.php?pos=shop&lang=en&section=news
Prior to release of the new album, on the 25th of September, there will be available a new 7″EP of FORGOTTEN TOMB entitled Deprived. The EP will be limited to 300 copies (100 green, 100 white, 100 red) only. It can be pre-ordered at: http://www.agoniarecords.com/index.php?pos=shop&lang=en&section=search&what=deprived&x=0&y=0

FORGOTTEN TOMB will be available at a full scale  European tour planned for November & December  2012; more news will follow shortly.

…And Don’t Deliver Us From Evil tracklist:

Listen to FORGOTTEN TOMB at: http://www.reverbnation.com/artist/artist_songs/1451977