Germany´s legendary Teutonic Heavy Metal Band GRAVE DIGGER have revealed the Album Cover and Title of their new album to be released this Summer!

The Return Of the Reaper is the title of the 17th! GRAVE DIGGER studio album and as mastermind Chris Boltendahl already revealed to NAPALM RECORDS, the album provides a strong focus back to the all time classic albums of “Heavy Metal Breakdown” (1984), “Witch Hunter” (1985) and “The Reaper” (1993). The artwork for The Return of the Ripper was created by Gyula (Hjules Illustration and Design) who is responsible for all GRAVE DIGGER art since 2004´s “The Last Supper”! 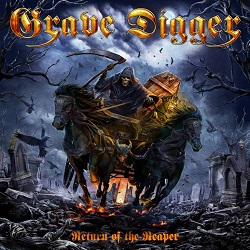 GRAVE DIGGER – Return of the Reaper

GRAVE DIGGER – Clash of the Gods