German stronghold of Satanic metal supremacy IRON BONEHEAD PRODUCTIONS announces October 1st as the release date for the vinyl releases of ABYSSOUS’ …Smouldering and CRUCIFIER’s Coffins Through Time…A Mourning in Nazareth. For a decade now, IRON BONEHEAD has scoured the extreme metal underground for only the best and darkest gems in all its forms. Black, death, doom, thrash, trad, whatever: as long as it exudes scuzz and sleaze, filth and fury, IRON BONEHEAD will unearth it…and always on that most glorious of formats, VINYL! 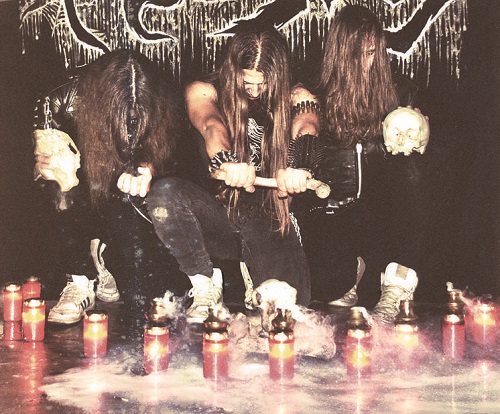 Originally released in 2012, ABYSSOUS’ …Smouldering debut demo displayed a fresh take on a rotten sound. Ever unearthing dark treasures, IRON BONEHEAD releases this cult gem on vinyl LP, bolstered by two newly recorded, previously unreleased tracks. Anchored in the ancient ways of the Metal of Death yet exuding a bold, flowing flair for songcraft, ABYSSOUS compositionally run the gamut from teeth-gnashing, tempting-the-corners-of-chaos violence to slowly simmering, doomed-out dementia, taking the listener on a journey to eldritch depths…and beyond, and back. Through it all, the power-trio keep the execution red-eyed and rabid and indeed …Smouldering. Now with a cavernous, 3D mastering job by P. Engel at Temple of Disharmony and new artwork by Misanthropic Art, ABYSSOUS’ …Smouldering has become that much more mind-melting. 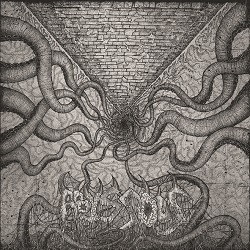 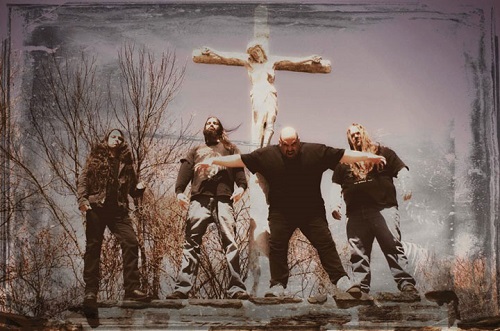 At long last, the entirety of CRUCIFIER’s recorded work during the dark, epochal 1990s is collected on double-LP vinyl, courtesy of IRON BONEHEAD PRODUCTIONS. Entitled Coffins Through Time…A Mourning in Nazareth, this 2LP collection comprises CRUCIFIER’s four demos – Humans Are Such Easy Prey (’91), Crown of Thorns (’92), Unparalleled Majesty (’93), and By Disgrace of God (’93) – alongside their Powerless Against tape from ’96 and the Trafficking With the Dead split with Nunslaughter from ’99. Long-running and well-respected in the metal underground, CRUCIFIER perfected a twisted and morbid sort of death metal that maintained a blasphemous, blackened edge that band leader/founder Cazz Grant would then expand upon in UG legends Grand Belial’s Key. CRUCIFIER’s lineups may have always been shifting, but their commitment to dark, deathly arts always remained firm, which can be heard in all evilness across Coffins Through Time…A Mourning in Nazareth, all of which has been powerfully remastered by P. Engel at Temple of Disharmony. Featuring a 16-page booklet featuring extensive liner notes, old photos, and flyers as well as an A2 poster and quintessential Chris Moyen cover art, this is the ultimate CRUCIFIER collection and a tribute to ancient times. 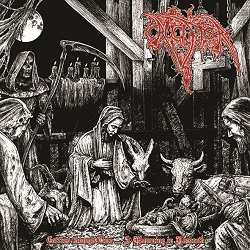 Tracklisting for CRUCIFIER’s Coffins Through Time…A Mourning in Nazareth
1. The Cinerarium
2. Demons Of Filth
3. The Funeral
4. Exhumed Remains Of A Decayed Corpse
5. Portrait Of Blasphemy
6. Introduction + Massacremation of the Flock
7. Disembowelment Lunacy
8. Apocryphal Nativity
9. Soul Burial
10. Chime Of The Goat’s Head
11. Sodomy of Angels
12. Spirits
13. Demons Of Filth
14. Something Wicked This Way
15. Portrait Of Blasphemy
16. A Mourning In Nazareth
17. Chime Of The Goat’s Head
18. Fire And Brimstone
19. My Lord Of Swine
20. Foul Deeds Will Rise