The power duo formed in 2006 when guitarist / vocalist Rasmus Booberg and drummer Tor Sjödén and started writing music inspired by the doom metal and stoner rock scene in and around their hometown of Stockholm, Sweden. Over time, the band evolved into the group known today as “NEW KEEPERS OF THE WATER TOWERS” recruiting instrumentalist Victor Berg. So far the band has released two records through cult label MeteorCity.

Since the beginning the band has been sliding towards a wider and more progressive sound. The group’s third full-length recording is presented as a largely conceptual album.

The band comments : “Cosmic Child’ is our most ambitious work yet. 47 minutes filled with dark but majestic melodies, psychedelic passages and a doomy groove. Some have gone to the lengths of calling it “Dark side of the Doom” (With reference to Pink Floyds legendary album with a similar title) and I guess our influences from early 70s progressive music has started to shine through the carpet of distortion. None of us have put so much emotion and effort into a piece of music of such epic proportion.”

NEW KEEPERS OF THE WATER TOWERS are releasing one serious pretender to the classic PINK FLOYD album metalized with heavy guitars for sure !

‘Cosmic Child’ is scheduled for Feb 18th on Listenable records 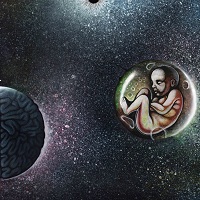