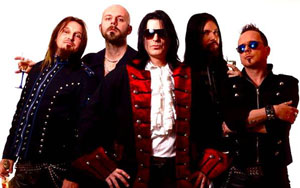 Mean Streak will release a new single on November 25, an acoustic version of “Crimson Sky“, the original version appearing on their latest album “Declaration of War”.

Mean Streak released their critically acclamied second album “Declaration of War” on January 28th, which instantly enteredthe Swedish charts. The interest for the band is also huge in Japan, where they went to perform a series of gigs in conjunction with the album. Check out the liveclip below! Please note that the vocals are not mixed properly yet, and that there will be an edited version of this clip.

“In For The Kill” video clip: www.youtube.com/watch?v=JKfr_7EnYuI