Norwegian Black Metallers CREST OF DARKNESS, whose sixth full-length album “In the Presence of Death” is scheduled for release on My Kingdom Music on the 25th February, have posted a new video of a track from the album on the band’s YouTube Channel. The video is produced and directed by MONITORmedia, using a special video mix of the track “Demon Child”. Photography is by Anders Børrensen and Levent Ultanur. Editing is by Øivind Kristiansen. The video of “Demon Child” can be seen at http://youtu.be/3-sNJCviSGY

“Demon Child” uses live footage of the band, which features the lineup of founder and frontman Ingar Amlien on vocals and bass, Rebo on lead guitars, Kjetil Hektoen (SJODOGG) on drums and Kjell Arne Hubred on rhythm guitars. Hubred left the band due to family and other commitments shortly after “In the Presence of Death” was finished and has since been replaced by DJEVELKULT guitarist Jan Fredrik Solheim.

Formed in the mid-nineties by Amlien at a time when his then-band CONCEPTION was at the peak of its popularity, CREST OF DARKNESS allowed Amlien to move away from the Progressive side of Power Metal and more fully explore his interest in Vampirism and Satanic ideology. Since then he has harnessed his passion for sonic brutality to create Black Metal that has grown in power and intensity over the eighteen years of the band’s existence. With an occasional nod in the direction of both Death and Epic Metal , and even a hint of Gothic, the sound is unmistakably CREST OF DARKNESS.

More information about the band can be found at http://www.crestofdarkness.com/. 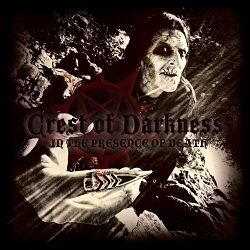 Tracklisting on “In the Presence of Death” as follows:
1. Intro
2. In The Presence Of Death
3. Demon Child
4. Redemption
5. The Priest From Hell
6. Welcome To My Funeral
7. Womb Of The Wolf
8. Vampire Dreams
9. From The Dead
10. The Day Before She Died

Nine tracks tracing the history of CREST OF DARKNESS, including the recently debuted “From the Dead” from the new album “In the Presence of Death” album, can be heard on the band’s SoundCloud page at http://soundcloud.com/crest-of-darkness/sets/crest-of-darkness