(Indianapolis, IN) – Metallers Youngblood have released their debut full-length album: NO RETREAT October 9th in North America and throughout Europe on Eönian Records and distributed by Sony RED & Nightmare Records.

Produced by Jeff Diehl (who has worked with such legends and luminaries as Gene Simmons, Sweet FA, Ma Kelly, Kramus, Healing Sixes, Eddie Kramer and many more.) NO RETREAT was recorded in the band’s hometown of Indianapolis and has been referred to as a hot, fiery fist of Rock n’ Roll and the band compared to as a blend of Warrant, Slaughter and Firehouse. Please see below for full track-listing.

Hailing from Indianapolis, Youngblood cut their teeth relentlessly playing 4 to 6 nights a week, 10 to 12 months a year. The band came onto the music scene when Sony/Epic Music first heard the band’s demo of NO RETREAT’S first single “Don’t Play with My Head.” The band worked tirelessly for nine months to generate forty-five tracks that were mixed and mastered by Diehl Productions. Sixteen tracks are being released on the band’s first album NO RETREAT. MelodicRock.com declares “Youngblood’s attitude and music have ‘star-power’ written all over it”, while Senda Producciones says NO RETREAT is “Insanely awesome …this music is f**king orgasmic!” Europe’s top Hard Rock & Metal publication, Fireworks Magazine sums up NO RETREAT in just one word “BRILLIANT!” 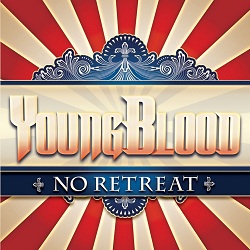 To purchase your copy of Youngblood “No Retreat“, please visit www.EonianRecords.com.