PESANTA URFOLK sets May 15th as the international release date for NOCTOOA‘s Adaptation. NOCTOOA began as an inevitable collaboration between longtime comrades Sammy Fielding and Jorge Gallo. Clad in black robes, adorned in owl insignia, the duo set out propagate their own brand of dark neo-folk music, aptly self-proclaimed “Cave Wave.” Although eerily unique, their sound undoubtedly harks to gloomy influences of yore, Ala Death In June, Faun Fables, and Swans, with a taste of Sixteen Horsepower twang. The addition of violinist Rita Revere and cellist Kaitlin McSweeney transformed the duo into a four-piece owlish ensemble. With this sonic balance and feminine energy brought to the table, NOCTOOA spread their wings to fly from the cave. Deep-droning vocals, spacious guitars, thunderous drums, and weeping strings form the sonic backdrop of their Adaptation debut. Instantly tangible and immediately affecting, Adaptation eerily resides in its own universe. The collaboration Scott Walker and Michael Gira could’ve made? Douglas P. diving deep into Faulkner’s Southern gothic? It is music beyond the grave, and for the grave, and yet it’s fully alive. Neo-folk, but not ‘neofolk’: Adaptation is much like its title, and moves mysteriously. NOCTOOA are the guides, and implore you to likewise spread your wings. 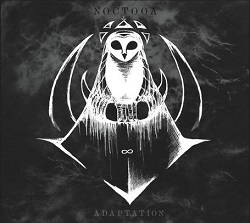