Pivotal Rockordings have made the NONEXIST cover of ATOMIC ROOSTER’s “Death Walks Behind You” and free extensive artwork to accompany the band’s latest album From My Cold Dead Hands available at http://label.pivotalalliance.com/nonexistbonus/. NONEXIST’s first single “Fire At Will” and covers of MEGADETH and CORONER are also available at the same link with more free covers to be made available in the coming weeks through various media outlets and social media sites.  The free artwork has been made available to accompany the band’s latest digital-only release and features 20 full pages of custom album art as well as front and back covers, all available in multiple formats (JPG,PDF,PSD) for fans to do with as they see fit – print, wallpaper, fanart, etc.  All artwork was conceptualized and created by Sofia Bennrup and Johan Reinholdz specifically for this album and its songs.

From My Cold Dead Hands was recorded at Multipass Studios, features 9 blistering tracks and is also accompanied by cover songs that Pivotal Rockordings is releasing for free via various social media websites and media outlets.  For more information on where exactly to find these cover songs please visit http://label.pivotalalliance.com to read the latest news.  NONEXIST’s debut full-length record Deus Deceptor was released in 2002 via Century Media/New Hawen Records and the lineup at the time included Johan Liiva,Johan Reinholdz, and DEFLESHED/DARK FUNERAL drummer Matte Modin.  Deus Deceptor was produced by Tommy Tägtgren andJohan Reinholdz at Abyss Studios and featured a musical direction described as a cross between early ARCH ENEMY and CARCASS(circa Heartwork). 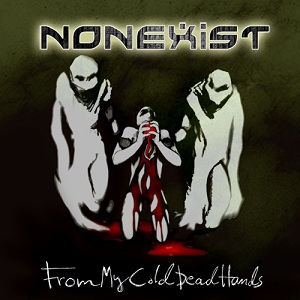 1. Dark and Tortured Universe
2. Presence Everlasting
3. Flesh Falls from the Bone
4. Days without End
5. Fire at Will
6. Collective Coma
7. From My Cold Dead Hands
8. Lost in Darkness and Confusion
9. Here Comes the Pain