Formed in 2008 in Bergen (Norway), the music from VINTERBRIS is highly inspired by groups such as Primordial and Moonsorrow while retaining its own atmosphere and originality. After having released an EP and a self-titled full-length, the band is now back with Solace, a desolate and melancholic record with the backbone of true Norwegian black metal. With a lyrical concept centered around one man’s struggle with self-acceptance, existence and place in nature, the soundscapes of Solace are complete.

Now, VINTERBRIS have joined forces with label NORDAVIND RECORDS. Kristoffer Aalhus (bass) comments on the signing: “Today we announce the great news of inking our first record deal! Vinterbris are very happy to have signed a contract with Nordavind Records for the release of Solace, and we look forward to seeing what this partnership can bring.”

Cover and tracklisting are as follows: 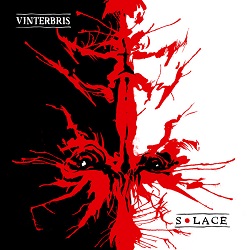 “Fathoms,” the first sample from VINTERBRIS‘ Solace, can be heard HERE!