Norwegian Black Metallers CREST OF DARKNESS have today announced a change in lineup that sees the departure of Kjell Arne Hubred after seven years with the band, and the arrival of DJEVELKULT guitarist Jan Fredrik Solheim to replace him. “It’s sad to be saying goodbye to Kjell Arne after all this time” said founder and front man Ingar Amlien, “but he has a young family and with CREST OF DARKNESS intending to work harder than ever, it was too difficult for him to devote the amount of time to the band that would be needed, and that’s something we understand.We’ve been very lucky in finding Jan Fredrik to replace him. He’s young, talented, highly motivated and has plenty of ambition. We’ve rehearsed with him several times and it was obvious that he knew CREST OF DARKNESS’ music long before he joined us. With the release of our new album imminent, he has brought a renewed sense of enthusiasm and purpose to the band, and as far as I’m concerned we’re sounding better and stronger than ever”. 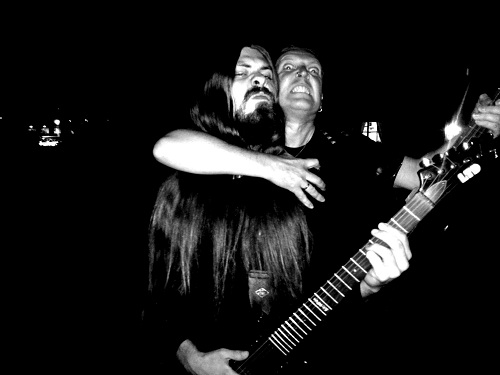 Formed in the mid-nineties by Amlien, CREST OF DARKNESS is a totally different beast from his former band CONCEPTION, which at that time was at the peak of its popularity. Whilst CONCEPTION tended towards the Progressive side of Power Metal, CREST OF DARKNESS allowed Amlien to indulge his passion for sonic brutality and his interest in vampirism and Satanic ideology, both of which are reflected in the band’s lyrics. Aside from Amlien on bass and vocals and Solheim on guitars, CREST OF DARKNESS’current lineup includes Rebo on guitars and Kjetil Hektoen on drums. Having so far released five full-length albums, the band is set to release their sixth, titled “In the Presence of Death”, on My Kingdom Music shortly. More information about CREST OF DARKNESS can be found on the band’s website at http://www.crestofdarkness.com

The official video for the track “Dru Nasu” from CREST OF DARKNESS’ album “Give Us the Power to Do Your Evil” can be seen at http://www.youtube.com/watch?v=IfMmS-EHM1s