With most of their old releases now largely unavailable, Norwegian Black Metallers TROLL have decided to make their entire back catalogue available for digital download via BandCamp. Available are 1995’s four-track EP “Trollstorm Over Nidingjuv”, 1996’s full-length “Drep de Kristne”, an album viewed by many as one of THE defining Black Metal releases, 2000’s “The Last Predators” and 2001’s “Universal”. The only album that will not be released this way is 2010’s “Neo-Satanic Supremacy”, the rights of which are still owned by Napalm Records. All the albums come with new artwork and are available for a minimum price of 0.50 Euros, or as much more as the fans feel like paying direct from the band at http://officialtroll.bandcamp.com/

Commenting on the decision to digitally self-release what are effectively iconic albums, frontman and founder Nagash said: “In today’s economy labels are really reluctant to release anything that has appeared previously, even though it is no longer available and regardless of how much demand there is from the fans. Sure, you can find most things these days via illegal file-sharing sites, but if you want high quality sound versions, with the artwork, and without all the viruses and Trojans that come as “hidden extras” with illegal downloads, you are better off paying a few pence to buy it legally. At least that way you are actually supporting the bands, and we believe that REAL fans are getting tired of everyone trying to rip off the bands, and genuinely want to support them”. 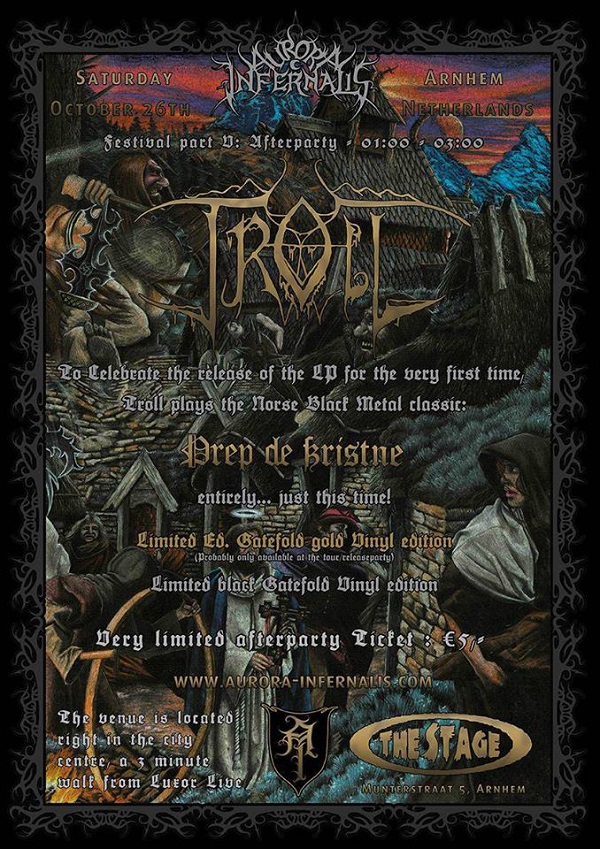 As well as the digital release, “Drep De Kristne” will be released on vinyl, in a limited edition Gatefold, in both gold and black versions. The vinyl will appear in October, in time for the band’s European tour, during which TROLL will play the entire album live at a special After Party at the Aurora Infernalis Festival in Arnhem on the 26th October. Full routing for the “Incantations for the World’s End” tour, with DODHEIMSGARD, TROLL and HETROERTZEN as follows:

More information about TROLL can be found on the band’s Facebook page at https://www.facebook.com/trollofficial

Below you can see the video by TENNERS GNISSELL video of TROLL performing “Neo-Satanic Supremacy” at Inferno Festival can be seen at http://youtu.be/KGPU6dYCOmM