Listen to Endlessly on Soundcloud

Listen to Get Well on Soundcloud

Philadelphia-based Nothing are proud to share not one but two new songs. Yesterday Rolling Stone magazine USA premiered Endlessly and NPR debuted Get Well on Tuesday’s ‘All Songs Considered’ show. Both songs are now available to stream via the links above. The band’s debut album Guilty of Everything will be released on February 28th in GAS, Benelux and Finland and March 3rd in the UK and Europe via Relapse Records.

Rolling Stone also tipped Nothing in their ‘Artists You Need To Know’ feature and had previously previously tipped Nothing as one ‘CMJ 2013’s 10 Best Discoveries’ after seeing them perform live; since then the band has toured with Whirr, opened for Cold Cave for Red Bull Music Academy Sound Select, and opened for DIIV on New Years Eve. Nothing will be embarking on new tour dates in the USA including a run down to SXSW with Weekend and spot dates with Ty Segall, Pup, and Solids.

Additionally, Relapse Records is launching an Instagram contest for fans of Nothing. It works like this: fans will create their own album cover for Guilty of Everything via a photo, artwork, sculpture, photoshop, etc. and submit them on Instagram with the #guiltyofeverything hashtag. The best entries will be reposted and have the chance to win the new album on vinyl.

NOTHING was formed in 2011 by Domenic Palermo. Previously Palermo was the brains behind the early 2000’s hardcore/punk act Horror Show. in 2002 Horror Show was put on hold after Palermo was incarcerated for a stabbing that eventually led to a 2 year prison sentence. Upon his return Palermo would take a lengthy hiatus from music. In 2011 Palermo released a demo tape titled Poshlost under the moniker NOTHING. After several attempts at constructing a solid lineup for the band Palermo met Brandon Setta. Setta would bring a lush, rich soundscape and a fresh approach to Palermo’s vision for NOTHING.

Setta and Palermo would handle the writing for the next release, a very rare 12″ EP that was released on Japanese boutique label Big Love Records called Suns And Lovers (A play off of the D.H. Lawrence book). It was limited to 300 copies and the bands share was donated back to the label for a Tsunami Relief Charity. The next release, Downward Years To Come was a 5 song EP and was recorded at the Rubber Tracks Studio in Brooklyn with Kyle “Slick” Johnson. The record was released by Baltimore Label A389 Records in November 2012. Written by Palermo and Setta, the concept behind Downward Years To Come was a dedication to several different poets who had taken their own lives. Head to NOTHING‘s bandcamp page here to stream or purchase Downward Years To Come and Suns And Lovers. 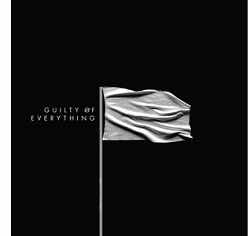 Nothing – Guilty of Everything
(Relapse Records)
Pre-order: http://bit.ly/NothingGuilty
iTunes: http://georiot.co/guiltyitunes

Hot News: Nothing shares Guilty Of Everything album details and release album trailer