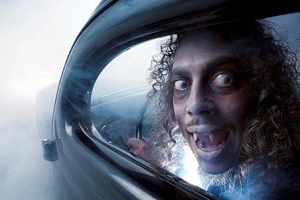 METALLICA guitarist Kirk Hammett has announced via Facebook that he’ll be joining EXODUS and DEATH ANGEL – two of the four Nuclear Blast artists who’ll be performing at his inaugural horror convention – on-stage for their encores.

Created to honor the weird, the wonderful, the eclectic, and the things that make your hair stand up on end, the heavy doors of collector / curator / historian / guardian Kirk Von Hammett’s crypt will be opened to the public to display the finest acquisitions in his extensive collection of horror memorabilia which includes rare movie posters & props, costumes, models, masks, and toys from various eras.  Private “Crypt” tours, signing sessions, and live music will be included in the three-day event.  Visit www.fearfestevil.com for the latest news on all the Horror Royalty who’ll be attending!

Catch up on the best in heavy metal’s latest CD & vinyl releases at the Nuclear Blast booth.

EXODUS will be entering the studio in February 2014 to record the follow-up to 2010’s »Exhibit B: The Human Condition«.

DEATH ANGEL will be touring with label mates CHILDREN OF BODOM throughout North America on the 2014 “Halo Of Blood” Tour, which launches on February 14th in Canada.