HELLS HEADBANGERS announces June 24th as the international release date for NUNSLAUGHTER‘s Angelic Dread. Set to be released on double-CD and double-vinyl LP formats, NUNSLAUGHTER‘s Angelic Dread is the American band’s first studio full-length in seven years, since 2007’s widely hailed Hex, also released by HELLS HEADBANGERS. With a massive discography bested in size only by Japan’s Sabbat, NUNSLAUGHTER are one of the longest-running active death metal bands around, nearing their 30th anniversary in 2017 – and, of course, they are the originators of “Devil Metal.” With a rabid cult following worldwide, NUNSLAUGHTER will deliver their defining statement with Angelic Dread. Says founding vocalist Don of the Dead, “The NUNSLAUGHTER maniacs have demanded it, and we are prepared to deliver – our first full-length studio album in nearly seven years. We have bided our time, and now we are ready to fill the skies with Angelic Dread.” 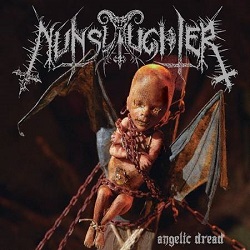 To celebrate the release of Angelic Dread, NUNSLAUGHTER will be touring Europe this July alongside Swedish bands Demonical and Warfect. Dubbed the “European Deathcharge Tour 2014,” the tour will hit various parts of western and eastern Europe, with NUNSLAUGHTER playing a handful of festivals – Under the Black Sun, Obscene Extreme, Metal Magic, and In Flamen – along the way. A strictly limited 7″ vinyl-release featuring exclusive NUNSLAUGHTER and Demonical material will be released in connection with the tour. Says Don of the Dead, “It has been two years since NUNSLAUGHTER defiled the shores of Europe. We will be landing in July, so prepare for Hell, prepare for the deathcharge!” Confirmed dates and venues are as follows: