French melodic death metal act, Obdurated, releases their most ambitious album to date, “I Feel Nothing”, under the wings of Danish metal specialists Mighty Music, and premieres new video teaser!

Following the footsteps of pioneering countrymen, Obdurated attempts to pass on the proud French, melodic metal heritage that forerunners such as Gojira, Yrkoon and Dagoba have paved before them.

Discerning the great Scandinavian melo-death tradition, NWOBHM and the modern US thrash scene, Obdurated has sought inspiration in some of the grand masters of these genres such as In Flames, Iron Maiden and Machine Head on the bands 3rd release, the first one with Mighty Music, “I Feel Nothing” – an album wound up with melody, technique and speed, and permeated with soaring guitar melancholia, fast, pounding drums and aggressive, opinionated vocals that will leave a heavy impression on its listeners.

Obdurated are no newcomers to the French metal scene. Since 2001, the band has released two albums and a cover-EP to great media appraisal, and played all over France at numerous occasions supporting heavy weights of the international metal scene such as Napalm Death, Sybreed and Benighted in front of massive crowds at festivals such as Coolnesstival, Chaulness Metal Fest, etc. Now its time for the rest of the world.

Under the wings of Danish metal specialists Mighty Music, Obdurated now for the first time reaches out for a global metal audience with the release of their first international album “I Feel Nothing”.

Watch the album teaser below:

“I Feel Nothing” will be released on CD and digital April 7 2014 worldwide! 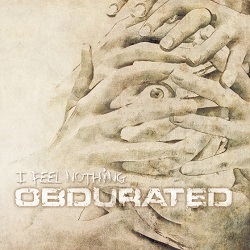