Beginning their career as  Xecutioner in 1984, OBITUARY remains as one of the most influential and groundbreaking bands in the death metal genre, one which they helped to create. Combining hyper-speed guitar riffing, complex arrangements and guttural screams, the band created a bleak and violent soundscape for metal fans worldwide! From 1989 – 1992 OBITUARY released ‘Slowly We Rot’, ‘Cause Of Death’ and ‘The End Complete’. Three death metal masterpieces that have stood the test of time and, to this day, remain as must have albums for any death metal fan. The ‘ROTTING SLOW IN EUROPE’ tour will combine an historic set of classics from those three albums only!!! This a rare and unique opportunity for all, so do not miss this!!!

Joining OBITUARY will be MACABRE, PSYCROPTIC and THE AMENTA.  With a focus on things that make happy shiny people cringe, Macabre exult in their musical chops as much as in the band’s sense of humor, their killer music, and its deadly subjects. Staying clear of trends,PSYCROPTIC incorporate many different elements of musical genres – extreme and otherwise – to capture a sound that is uniquely their own: a precise blend of brutality, intensity and groove. And THE AMENTA.  Combining the uglier aspects of modern black metal, the atonality of death metal and the grit and grime of extreme industrial. 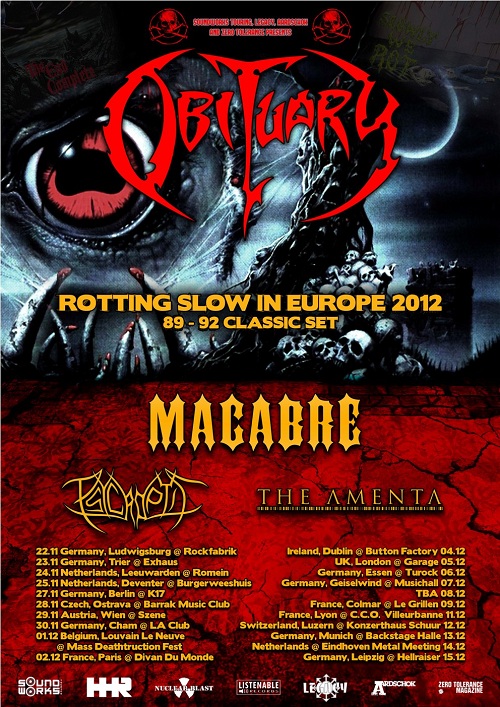