German progressive death metal titans OBSCURA have just released a guitar tab book for their critically acclaimed 2011 album Omnivium. The tab book features all of the rhythm and lead guitar tabs from all 9 songs on the album in addition to extensive liner notes written by guitarists Steffen Kummerer and Christian Muenzer. The two renowned guitarists also put together a video lesson for the song “Vortex Omnivium” via their official YouTube page here.

Guitarist/Vocalist Steffen Kummerer commented on the release of the book: “After the huge success of the tablature book for our second album Cosmogenesis we received a never-ending flood of e-mails asking if we will release a book for Omnivium as well. We heard you and within the last couple of months the official tablature book for Omnivium took shape. 220 pages of shredding, 9 songs of pure progressive death metal including all lead & rhythm guitar parts. The songs are rearranged for two guitars, so you’re able to play each song within a band context. For Omnivium we decided to release the guitar transcriptions only. For the next album we plan to release  a separate bass & drum instructional book as well , thick as a bible.”

Additionally, OBSCURA recently announced a special 10th Anniversary show this December in Landshut, Germany. This one night only event will take place on December 15th at Alte Kaserne with special guests DARK FORTRESS, HOKUM and ILLEGIMITATION, an incarnation of the band’s original lineup, who play their first demo in its entirety. More information on the show including ticket information is available via the band’s official website here. The band will also be making their first Latin American appearance where they will be playing alongside MOONSPELL in Mexico City this December.

Omnivium is currently available for streaming at this location. 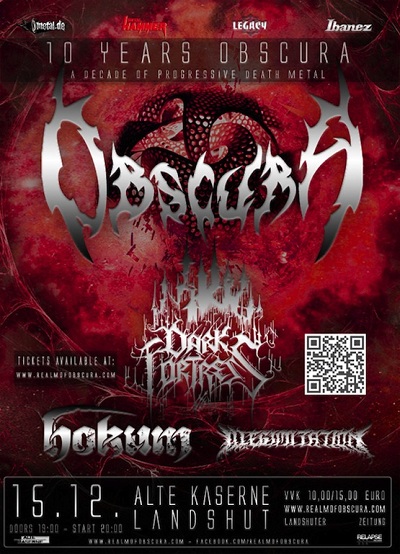 Hot News: Swedish Aeon and German Over Your Threshold to go on G/A/S Tour supporting Obscura in March of 2013!