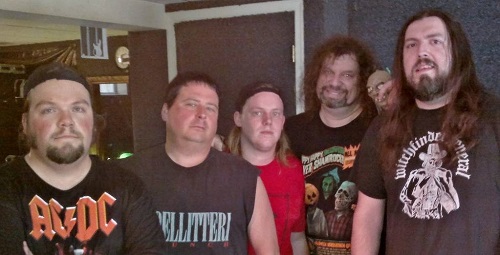 HELLS HEADBANGERS announces January 21st, 2014 as the international release date of two deluxe reissue CDs, both by OCTOBER 31: the Fire Awaits You debut from 1997 and its follow-up, Meet Thy Maker from 1999. Respective covers, tracklistings, and more info are as follows: Tracklisting for OCTOBER 31’s The Fire Awaits You reissue CD

At long last, OCTOBER 31‘s classic debut album, The Fire Awaits You, is seeing a long-overdue reissue, courtesy of the band’s new label home, HELLS HEADBANGERS. Released in 1997 to a small yet fervent throng, OCTOBER 31’s The Fire Awaits You saw DECEASED vocalist/drummer King Fowley team up with bassist Jim Hunter (WHILE HEAVEN WEPT, TWISTED TOWER DIRE) and guitarist Brian Williams to create a rollicking ride of horror-themed heavy metal. Classic metal songwriting is the order of the day here, as the band ably sweep from speed metal surge to NWOBHM-inspired melodicism to occasionally an epic metal moment or two. At the forefront are King Fowley’s clear ‘n’ commanding vocals, as the erstwhile DECEASED Frontman decided to use a cleaner register that lost none of his trademark bite. Amended to this new edition is the band’s first demo, Voyage to Infinity from ’96, as well as tribute covers of IRON MAIDEN and OZZY OSBOURNE. Finally, The Fire Awaits You! To coincide with the reissue of the band’s classic The Fire Awaits You debut, HELLS HEADBANGERS is reissuing OCTOBER 31‘s celebrated second album, Meet Thy Maker. Originally released in 1999, Meet Thy Maker saw DECEASED vocalist/drummer King Fowley once again command his troops onward to heavy metal glory, this time with an even darker and more epic aspect. Much of this can be credited to the addition of Kevin Lewis on rhythm guitar, allowing original guitarist Brian “Hellstorm” Williams to work his magic on lead guitar, with the lo-end anchored as always by Jim Hunter (WHILE HEAVEN WEPT, TWISTED TOWER DIRE). Capped off by an emblematic cover of SAXON’s “Power And The Glory” that they nearly make their own, Meet Thy Maker is truly the album where OCTOBER 31 solidified their unbending, still-enduring aesthetic. With this reissue, HELLS HEADBANGERS – the new label home of OCTOBER 31 – adds 1998’s Visions of the End EP along with four live/demo bonus tracks. Classic heavy metal never goes out of fashion, so time to Meet Thy Maker!