Age of Perversion, the second album by France’s OFFENDING, is one cruel death metal beast. Ripping solos and pummeling blasts reign down like a hammer on the listener through nine tracks of pure-sombre death. This is dark brutality in concentrated form that will appeal to fans of true death metal (Cannibal Corpse, Suffocation, Vile, Hate Eternal, etc).
Order the album at this location. 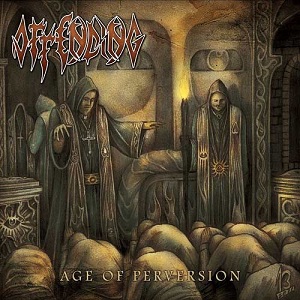 Founded by Gropoil (ex Asmodée) and VR (ex Asmodée, Sael, Reverence), OFFENDING released his first 4 tracks demo in late 2005. This self-production is the result of an already good stage experience, the group has played on stage alongside bands like Killers, Genital Grinder, Necropsy, Iost, Breakdust, Prophecy (United States), Godlesstruth (Czech Republic).
In early 2007, the mini CD The Destruction of The Human Spirit is born and presents the arrival of The Butcher (vocals) and Yoni (Bass). This new record confirms the potential of OFFENDING who later won the springboard National Sin Cession and played on stage at the Rock Hard Tent of the Hellfest 2009 festival alongside Vader, Immolation, Skinless, Enslaved, Sacred Reich … It is time then for OFFENDING to start the recording of its first album entitledHuman Concept Mixed and mastered by By Neb Xort at Drudenhaus Studio (Anorexia Nervosa, Reverence, Alcest), it delivers a brutal impression of darkness.

In early 2010, Cyriex (Seth, Asmodée, Decrepit Spectre) joined the band as second guitarist after the departure of Loic, allowing Offending to confirm its status as a live band performing in a French tour alongside The Seven Gates. In August 2010., after signing with the American label DEEPSEND RECORDS , OFFENDING finally releases Human Concept.

From then on, OFFENDING has been working on its second album Age Of Perversion (again mixed and mastered by Xort / Drudenhaus Studio). the style goes deeper, and darker in personality. Album release in 2012, followed by a series of promotional concerts.