Ohm Resistance Records has set April 8 as the date on which Another Scheme of the Wicked from Industrialized Black Metallers INVERTIA will be released.

INVERTIA are the New England duo of guitarist/vocalist Dave Coppola and drummer/programmer Tim Winson. A mirror displaying some of the darkest paradoxes and truly terrifying segments of American society, INVERTIA‘s music ridicules the hypocrisy of cult-religious fervor with nitroglycerin and napalm shred guitars and psycho-bombastic drum programming.

The follow up album to 2013’s self-titled debut, Another Scheme of the Wicked combines a blistering five-track assault with five remixes from musical backgrounds, including Ohm Resistance veterans Justin K. Broadrick (GODFLESH, JESU), End.user (THE BLOOD OF HEROES), and Submerged (METHOD OF DEFINANCE, THE BLOOD OF HEROES).

INVERTIA has been described by Metal Army America as a “bastard child of Gorgoroth.” One could also view them as a hybrid of SKINNY PUPPY, SUFFOCATON, MERZBOW, and EDWARD SNOWDEN: revealing the truth by demonstrably inflating the cultural lies and political deceit of our times to a soundtrack of black metal dissonance and their infamous programmed “buzz beat.” One of the absolute scariest moments ever recorded on Ohm Resistance occurs during the R3TRD remix of “They’re Everywhere,” with a Pentecostal preacher vampirishly admonishing children to visit with him as he speaks in tongues. Must be heard to be believed – as well as the entirety of Another Scheme of the Wicked.

Album track “The Sidewinding” is now streaming at invertia.bandcamp.com. 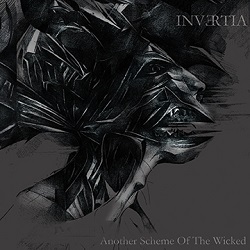 Pre-order Another Scheme of the Wicked at either of the links below:
iTunes
Amazon