Check out mauling opening number “Molecular Resurrection,” at THIS LOCATION. 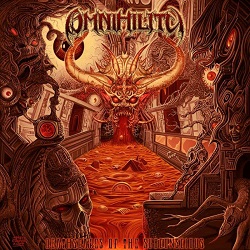 Deathscapes Of The Subconscious Track Listing:

Hailing from the Willamette “Valley Of Death,” amongst the woods of Eugene, Oregon, OMNIHILITY — named for the absolute belief in nothingness — manifests intense, brutal and technical death metal; a nod to the old-school past combined with the immense speed and accuracy of death metal present, all while subconsciously channeling energy from arcane sources to destroy the minds of the multitude. Deathscapes Of The Subconscious lacks none of these attributes and brings the band to an entirely new level of prominence.

Deathscapes Of The Subconscious will be released via Unique Leader Records on July 22nd, 2014. Preorders are available now at THIS LOCATION.