Swedish Modern Metal band One Without will enter the studio in October to record their upcoming third album together with producer Pontus Hjelm. One Without has also launched a campaign through Pledgemusic to get the fans involved in the project.

One Without was founded in 2003 in Gothenburg, Sweden, and has to date released two albums, and one EP. The album “Sweet Relief” was released in 2011 (OW Productions), and the debut album “Thoughts of a Secluded Mind” in 2009 (Lifeforce Record, later re-released by OW Productions). The EP “Numbers” was released digitally on the 24th of June this year, (OW Productions) to give a hint on how their third album will sound.

One Without is collaborating with producer Pontus Hjelm on the upcoming album, and he has previously worked with artists such as Dead By April, Devlin, The Unguided, Engel, Example, Lyracis, Nana Tanimura, and many more. 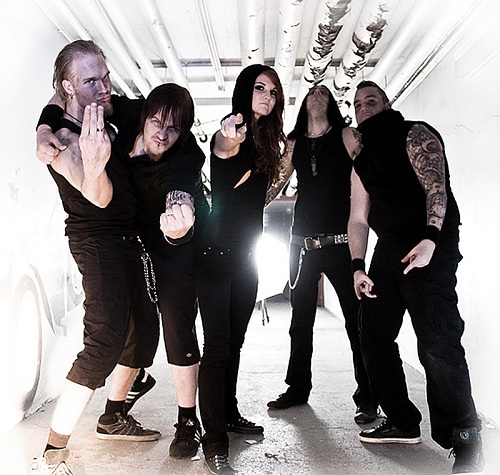 To fund the album recording, One Without has partnered with crowdfunding platform Pledgemusic, and are giving away exclusive items to those who contribute.

One Without recently made a cover of British pop-star Ellie Goulding´s song “Lights”, which got Ellie Goulding herself to post about it on her facebook and twitter accounts, pointing her fans to the cover. Ellie Goulding has over 1.6 million “likes” on facebook, and over 770 000 followers on twitter. “Lights” has been on the American Billboard top 100 for over 29 weeks, and are still going strong.

Link to “Lights” by One Without: http://www.youtube.com/watch?v=T9TMpc7Zc0w&list=UUNrjwES4RKjeHDfPLDwfxOA&index=0&feature=plcp

One Without has toured Europe with Dead By April, Evergrey, Katatonia, Marionette and The Genitorturers, been featured in numerous magazines and radio shows and shared stages with bands like Soulfly, Epica, Doro, Krypteria, Paradise Lost, Carpark North, and All Ends, as well as been playing at festivals such as “Toulouse Metal Fest” in France, “Sweden Rock” in Sweden, “ROFA Xmas Festival” in Germany and “Rock Shock” in Denmark.

ONE WITHOUT – Numbers EP

Hot News: One Without call it quits

Hot News: One Without does Metal cover of Ellie Goulding ´s “Lights”

Hot News: One Without release part two of tour-video diary from “The SlaughTour” with Dead By April and Marionette

ONE WITHOUT – Sweet Relief

Hot News – One Without signs to Wormholedeath

ONE WITHOUT – Thoughts Of A Secluded Mind