The release date of the ONWARD vinyl edition “Evermoving” is March 28th, 2014. The limited vinyl edition consists 250 pieces (black). The preorder phase will start on March 14th, 2014 in our webshop.

In the course of our LP-Rerelease series (limited to 500 hand-numbered copies), we are now planning to do the first two full-length-albums of ONWARD. The band was created in 2000 in Montana/USA by the later CRESCENT SHIELD-singer Michael Grant (who died in 2012); they played at that time very untrendy classic US/Power Metal with some NWoBHM influences.

At the beginning of 2001 they released their debut album “Evermoving” via Century Media (only as CD). The eight Power-Metal delicacies could definitely convince fans of old genre-classics with their classic and sophisticated double guitar harmonies and epic and abundant song structures. The vocals are majestic and melodious, sometimes in higher pitches; and the peculiar sound makes them stick out of the masses (like some years later their compatriots PHARAOH). The powerful and dynamic production by Denis Gulbey (e.g. JACK STARR, MANILLA ROAD, GOTHIC KNIGHTS) lifts this LP definitely to the top class of their genre. The very detailed cover artwork was made by Ioannis Vassilopoulos, who has worked for FATES WARNING, DREAM THEATRE and DEEP PURPLE.

A true masterpiece for all fans with a taste for genuine traditional Heavy Metal! 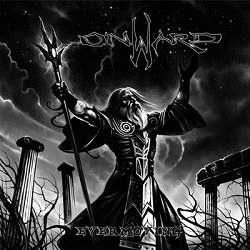 TRACKLIST:
Side A
1. The Kindness Of Strangers
2 Onward
3. The Waterfall Enchantress
4. The Last Sunset
Side B
1. Absolution Mine
2. Witches Winter Eternal
3. Storm Coming Soon
4. The Lost Side Of The World
Total Playing Time: 38:01 min