San Francisco based doom rockers, ORCHID, have announced to release an EP featuring 3 brand new tracks + 1 song from the latest full-length album, „Capricorn“, on September 7, 2012.
The EP, entitled „Heretic“, marks the first release for Nuclear Blast and will be released both digitally as well as on 10“ vinyl. 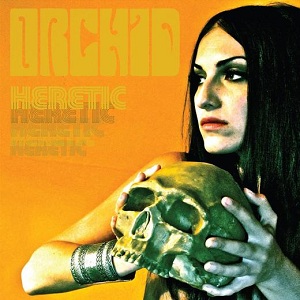 Commented guitarist Mark Baker: “Late in 2010, after we submitted the „Capricorn“ full length to our label and waited for the release, we realized that there wouldn’t be any extensive touring, so we just kept writing and rehearsing new material. A few months later, we were back in the studio cutting basics for new songs. By the time we finished the business of changing labels, we had way more than one album worth of new songs. We, along with Nuclear Blast, decided it would be a great idea to release a few of those on an EP this year while we wrap up everything for our next full length. We’re really excited for people worldwide to get a chance to check out what we’ve been up to in the last year. These new songs have the classic, anthemic ORCHID sound that people expect from us, along with a few elements that we’ve never shown before.”

Hot News: Orchid – Tour kicks off today! Witchcraft had to cancel their shows due to serious health issues!

Hot News: Orchid – reveal „The Mouths Of Madness“ tracklisting, comment on every song!