ORPHANED LAND have become one of the most talked about bands in heavy metal this year. Between being featured on The World, releasing a new album and becoming a unifier of Arabs and Jews in the middle east, ORPHANED LAND have proven that music can cross all boundaries and bring people together. Now, you have the chance to see fans from all walks of life coming together at Hellfest to watch ORPHANED LAND. The link below shows the band playing their final song of the night and the fans going wild as ORPHANED LAND deliver one of their most moving performances ever:
http://www.youtube.com/watch?v=lIefSVxvdns

Vocalist Kobi Farhi comments, “At Hellfest, Orphaned Land proved once again that music is above politics, above religion even. Music is our religion and once again we succeeded to create harmony and unification between so called enemies. Check out this video to understand the power of music and hopefully we will visit your hometown sometime in the near future! We salute you all, warriors of light!” 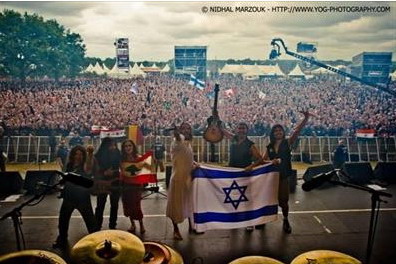 ORPHANED LAND recently teamed with Metal-Army.com to give their music away to fans in countries who have banned the group. By visiting http://www.metalarmyinternational.com, fans in all Middle Eastern countries can download ‘The Never Ending Way of ORwarriOR’ completely free.

Hot News: Orphaned Land – new video for “All Is One” online

ORPHANED LAND – All Is One

Hot News: Orphaned Land – Post Trailer For “All Is One” Documentary; Guitar Play-Along and Announce Support Acts for Upcoming Tour!