Osada Vida, one of the most interesting Polish bands on the prog-rock scene, reveal the title and cover artwork of their first live DVD. The material entitled “Where The Devils Live” includes the recording of their live appearance at the Wyspianski Theater in Katowice, Poland in November 2011. Selected photos from the show are available at THIS location. 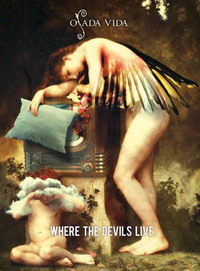 “I wanted the cover to be a summary of a certain period in Osada Vida’s history (at the same time, I didn’t want it to be a typical live album cover). This DVD is such a summary, it is the climax, the finale. We played a selection of the best songs from our albums. That’s why the artwork features elements taken from all of our three releases. I’ve also added into the mix the pensiveness of an incompletely dressed winged woman with an evident defect of her upper limb, the anxiety of a crying kid, and a pinch of disturbing colors.” – that’s how Rafał describes his project.

Metal Mind Productions set the release date of “Where The Devils Live” DVD for April/May. Full details to be announced soon.