Fresh off the release from her final album, Hydra, OTEP has announced she will be headlining theSeduce and Destroy tour beginning March 8th in Sacramento, California. Support will come from ONE EYED DOLL and PICTURE ME BROKEN as they make their way through twenty-two cities.  See a full listing of tour dates here. 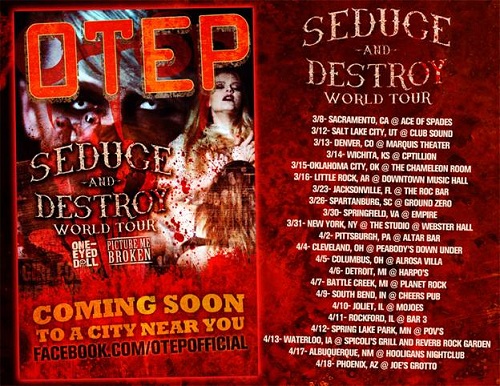 “The Seduce and Destroy World Tour will be a vortex of dissident cabarets, spiritual intercourse, and a complete and total mutiny of the senses. We are excited to bring new songs from Hydra to life on stage and for everyone to finally get a glimpse of this barbaric fiend. Our goal is to pollinate your souls with powerful music and incite mental riots wherever we go”, comments Otep Shamaya.

Hydra is available through the Victory Records Web Store and can also be found on iTunes/AmazonMP3.  OTEP’s new music video for the hit single “Apex Predator” will premiere on February 25th on VEVO.

For more information on OTEP:

Hot News: Otep – Prepares For The Release Of Her First Ever Live Album