The long awaited premiere will happen from May 29th to 31st, 2014: mammoth-like festival OUT & LOUD happening in Geiselwind, Germany!!! So far big names such as BLIND GUARDIAN, DORO, POWERWOLF and BEHEMOTH have been confirmed, but since there`s a bit of time left til the festival will open its gates, more and more classy acts jump on board constantly!

Take SAXON, for example! Founded in the mid-70s, this heavy metal battleship has proven to be one of the most reliable and long-lived out there. No matter if you pick “Wheels of steel” (1980) or “Call to arms” (2011) – the veterans from Yorkshire, England only deal in finest steel and incredible anthems. Early 2013 they unleashed pure riff glory with their most recent output “Sacrifice”! Expectations for SAXON`s show at OUT & LOUD are running high, because they are regarded as one of the most energetic and entertaining live acts out there!

Germans DUST BOLT might be a wee bit younger than the above-mentioned British lads, but they know damn well what they`re doing anyway: before they recorded their first demo in 2009, they had already shared the stage with the likes of Sepultura and Napalm Death!!! In 2012, their debut “Violent demolition” got released, and this one definitely packs a punch when it comes to old school thrash metal. These hopefuls have recently entered the studio again to record their second album! 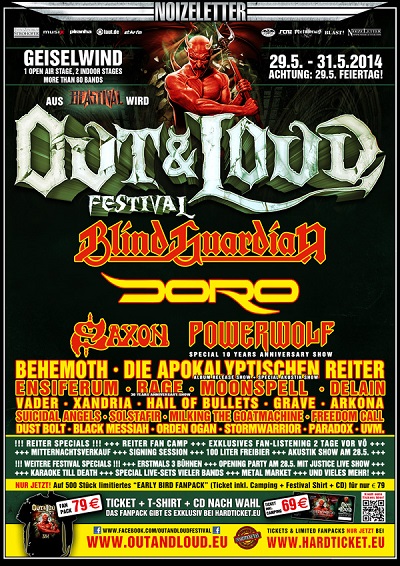