Lipnicki was in the audience watching the jam session and when “Seek and Destroy” began he was heard to shout “Oh, I know that song!” then jumped unto the stage and took the reins from MEATSHANK drummer Shane Cook. It was an unforgettable moment that will forever live in the memories of those involved. 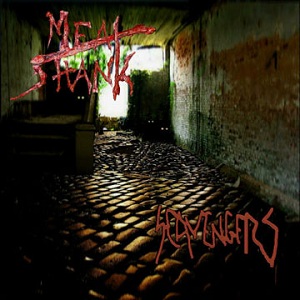 MEATSHANK‘s Scavengers album is streaming in its entirety at meatshank.stereokiller.com.

We Play Loud, We Play Fast, We’re MEATSHANK and We Play Fucking Metal! That’s about the size of it. One band, three guys, one EP (Meat ‘n Cider), two full-length albums (self-titled and Scavengers), numerous high octane shows, and one hell of a lot of bullshit-free Thrash Metal. New full-length album coming in mid-2012!