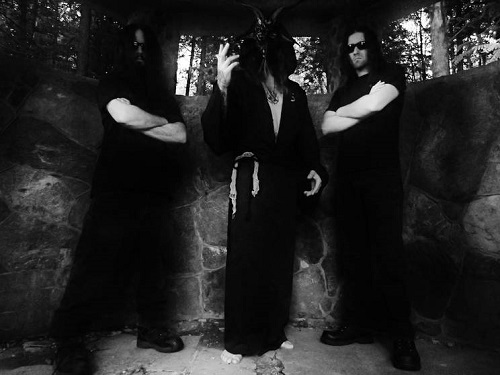 American black metal cult PACT premiere the new track “Baal-Zebub Lord of the Flies” at heavily trafficked web-portal Eternal-Terror.com. The track hails from PACT‘s highly anticipated second album, The Infernal Hierarchies, Penetrating the Threshold of Night, set for release on April 15th via MORIBUND RECORDS. The follow-up to 2012’s breakthrough debut The Dragon Lineage of Satan, PACT‘s The Infernal Hierarchies up-ratchets everything in the power-trio’s already-loaded arsenal – militant songwriting, commanding execution, vortextural violence – once again proving that pure black metal is still a wellspring of diabolism and hatred if treated with respect and the right values. And just like its title, the nine-song The Infernal Hierarchies, Penetrating the Threshold of Night offers the listener myriad sinister paths to glory. Hear one of those paths exclusively HERE. 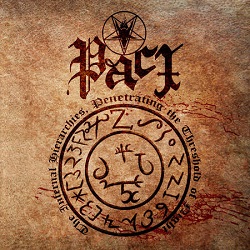 “The Infernal Hierarchies was recorded at our own studio, Nuclear Funeral,” reveals the band of their new MORIBUND album. “It was mixed and mastered at Anthropicide Studios for a much better production than The Dragon Lineagerelease. It features written works by black magick practitioner and author E.A. Koetting. Our approach to writing extends far beyond the process of merely composing songs and reaches into worlds of occultism and dark spirituality. Our band plays the music that we want to hear. We present a work of true sonic black magick that will unleash the spirits of the infernal hierarchies from the depths of the subconscious.”

In other PACT news, the band will be playing the Wrath Of The Goat III fest in Pittston, PA at The Rattler, set to take place September 19-20. PACT will be playing alongside fellow MORIBUND cults SUMMON and WORMREICH and other noteworthy bands such as Kult Ov Azazel, Manticore, and Martyrvore. A flyer for the event can be found below, and more info can be found HERE.