With a decade on the Italian metal scene under their belts, Pagan Black Metallers DRAUGR have been filming a video for the track “Legio Linteata” from their second full-length album “De Ferro Italico”. True to its subject matter and the ethos of the band, which harks back to the countrie’s Pagan warrior past, the video was filmed in the ancient ruins of Alba Fucens close to Aquila and was directed by Gianmarco Colalongo. It is anticipated that when ready the video will make its internet debut on Blank TV. Stills from the video have been uploaded onto DRAUGR’s Facebook page and can be seen at https://www.facebook.com/officialdraugr

Recorded and mixed by Davide Rosati in 2011 at the ACME Recording Studio in Italy, and mastered by Mika Jussila at the Finnvox Studios in Finland, the album “De Ferro Italico” recounts the deeds of a group of warriors whose devotion to the archaic traditions of the Italic cults of their ancestors put them in direct conflict with Rome and Emperor Theodosius’ decree, which, in 392 AD, led to the persecutions of all Pagan cults and paved the way for the rise of Christianity. Commenting on the actual filming of the video, Ursus Arctos, DRAUGR’s keyboard player, said: “We especially chose the ruins of Alba Fucens in which to film the video because they have an ancient and solemn atmosphere which we thought was appropriate for a song celebrating the actions of our ancestors who risked all to oppose the forces of Roman imperialism and the Christian religion”. 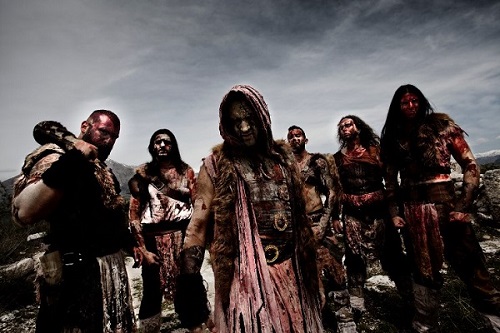 Formed in 2002 from the remnants of various Black Metal bands, and playing Black Metal in the style of bands such as DARKTHRONE, IMMORTAL and MARDUK, DRAUGR’s interests were always rooted in the Pagan spirit of the Abruzzo region of Italy. It was an interest they used to develop their musical style over the years, adding keyboards in 2007 to give their sound the more epic feel that was to become what the band itself calls “Italic Hordish Metal”. DRAUGR’s first full-length album “Nocturnal Pagan Supremacy” appeared on Christhunt Productions in 2006, and was followed by “De Ferro Italico” on To React Records in 2011. The band is currently working on new material for their third full-length album.

DRAUGR is set to celebrate their 10th Anniversary with a special two hour show at Devilraid 9 in Manoppello Scalo (PE), Italy, on the 8th June. More information about DRAUGR can be found on the band’s website at http://www.draugr.it

Two tracks from DRAUGR can be heard on the band’s SoundCloud page at http://soundcloud.com/draugrofficial