The legendary PAGANFEST is ready for the next round – of course sporting the biggest names of the genre! But there`s also new bands to discover and it`s already pretty safe to say that the PAGANFEST 2013 tour will fulfil every wish with battle anthems, party atmosphere and massive riffs.

Headlining will be none other than mighty ALESTORM who have left no stone unturned in the past couple of years with their hefty brand of pirate metal! Russians ARKONA also know exactly how to get a good heathen party started – they will bring along their new live DVD. Swedes THYRFING have been around since 1995, and their pumping viking metal is the stuff of legends. The guys will have their new album ready in time for tour kick-off!

EX DEO from Canada are much more than just a Kataklysm sideproject – their second album „Caligvla“ recently mingled epic death metal with hymnic character impressively. WOLFCHANT, on the other hand, stand for epic pagan metal from Germany. The band is currently working on the successor to “Call of the black winds” and will blast out new songs at the PAGANFEST! Opening will be Hungarian act BORNHOLM who fuse black and pagan sounds in order to tear your heads off with new album „Inexorable defiance“ !

As special guest at all extended shows VARG and the newly confirmed KALMAH will appear!
KALMAH are back to show their elaborate melodic death metal to the masses! The quintet from Oulu has just finished the songwriting for their 7th studio album. They plan to enter the studio in January, so you can be shure to listen to new KALMAH songs at PAGANFEST 2013!

Here you can find all dates: 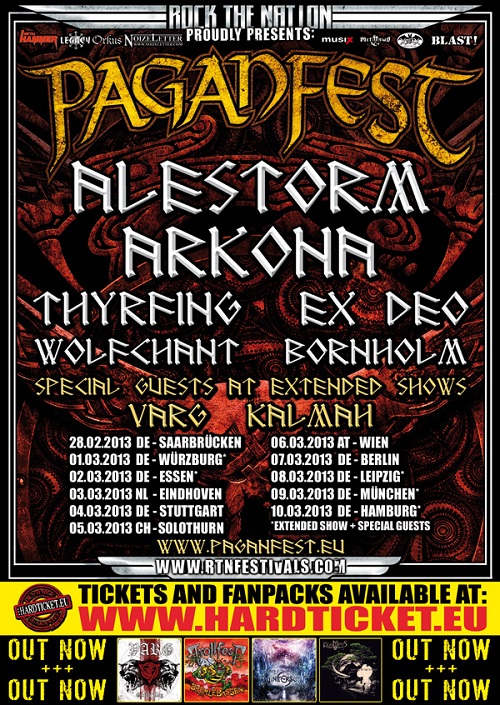