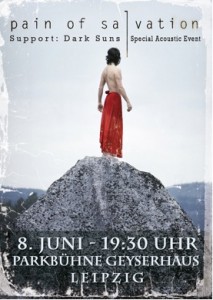 Following up on their highly successful European headlining tour through 15 countries in February and March, which served as an introduction for a new line-up of the group, Sweden’s PAIN OF SALVATION are now announcing their next shows for the live-campaign for the “Road Salt” releases.

Tomorrow, June 8th, PAIN OF SALVATION will be playing a special acoustic show at the Parkbühne Geyserhaus in Leipzig / Germany, with support coming from Dark Suns.

Find out more details about this event here: http://www.geyserhaus.de/?page_id=4&event_id=4469

On the band’s earlier European tour, a stop at the Ramones Museum in Berlin / Germany was utilized to record two special acoustic jam-tracks for Germany’s Metal Hammer magazine.

Additionally, and rather last minute, PAIN OF SALVATION have been added to this year’s line-up of Metaltown Festival in Gothenburg / Sweden, where they will be opening the main stage on June 15th. See more details here: http://www.metaltown.se

Further international shows, including a next run of South American dates, have been announced now as well. Here is a list of all upcoming shows for PAIN OF SALVATION:

PAIN OF SALVATION’s latest album release, “Road Salt Two”, managed to enter the official national charts upon release in Autumn of 2011 in the following European countries: Sweden at # 24, The Netherlands at # 82, Finland at # 31, and Norway at # 51 in its second week (first week was at # 94).
Additionally to the standard album on CD and Digital Download format, “Road Salt One”
and its follow-up twin-release “Road Salt Two”, are also available in limited edition
Digipak format and as Gatefold LP on 180g. black vinyl.