On 21st December 2013, on the day of Winter Solstice, new album of Czech pagan/black metal act PANYCHIDA entitled “Grief for an Idol” was released. The release is the result of collaboration of ug metal labels Paragon Records (USA), Cursed Records (AUT), and Czech Werewolf Productions. The record includes 11 new tracks. To name just one of the few interesting guest who contributed to the album we should mention Norwegian singer and member of HELHEIM/TAAKE V’ganðr, who took care of the lyrics and vocals in the song “Minnestund”. The sound of the band has moved towards a more aggressive tone while avoiding usual genre clichés. In support of the album there will be two European tours taking place in 2014. The first one will be done with Serbian death/thrash act INFEST in May and the second one will be accomplished with polish ARKONA, Czech INFERNO and ARMADA from Mexico. Promoters can get in touch for more info!!!

Besides the classical CD with 16 page booklet, also a digital download for only 80 CZK (less than 3 EUR) is available. Orders can be also sent to: info@panychida.com, where you can order a physical CD and a new T-shirts with a motif of the Slavonic song “O Velji Vezě” . 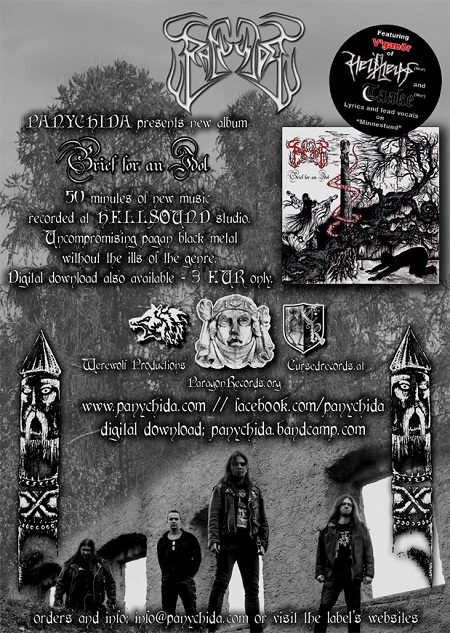