THE CULT IS ALIVE…and Chilean mega-cult PENTAGRAM CHILE (see below about why this is now the new moniker) is at least working on their first ever album…to be released sometime this fall via Cyclone Empire!!!

“First of all, many of you have heard rumours about a significant line-up change in the band. Unfortunately it’s true, as we have decided to part ways with our original drummer Eduardo Topelberg, a.k.a. “Eurynomos”. When we did the 2009 reunion tour, first in Chile and later in Europe, the chemistry within the band was great and we agreed to carry on and finally record our first studio album. Juan Pablo Uribe (guitar) and I got together months later to start writing, and the outcome was amazing. We wrote about 8 songs in the first weekend, which in our opinion totally live up to the standard set by the classic demo songs.We then set a date for January 2011 to track the drums in Chile, but when I arrived there, ready to record, I found out that Eduardo had experimented some very drastic changes in his life, which unfortunately affected his performance as a musician. We still went into the studio to give him a chance, but the result was just not good enough to end up on our long-awaited debut album.
We all love Eduardo dearly and we wish him nothing but the best, but my impression is that playing drums is just not a priority for him any more. I sincerely hope he proves me wrong in the future, as he will always be part of the PENTAGRAM family, but we needed a change if we wanted to move forward. 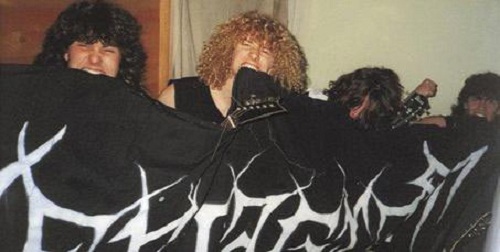 Enter Juan Pablo Donoso, a legendary Chilean drummer who has been active in the scene for almost as long as we have, and whose drumming skills have been the foundation of bands such as SADISM and THORNAFIRE. He has also lent those skills to a number of bands as a session drummer, plus he has produced/engineered tons of Chilean metal albums in his own Sade Studios. Having witnessed those early PENTAGRAM shows in the eighties as a teenager, he immediately understood what we were looking for in a drummer. Juan Pablo has now finished tracking the drums for the album, and we feel that he has really taken those songs in and interpreted them with the original PENTAGRAM style in mind. No lightning-fast, sampled, quantized drums, but pure feeling, the same primitive, brutal, frenzied feeling of our early material.

Now we can finally move on and finish what we feel is a historic debt: The first-ever PENTAGRAM stuio album. At this point I want to thank our label Cyclone Empire for their patience, understanding and support. Their comment: “It has taken so long for you to record and album that a year more or less doesn’t really matter!” On a different subject, we have decided to officially change our name to PENTAGRAM CHILE, fundamentally out of respect to the “other” PENTAGRAM (the original and true PENTAGRAM, if you will), led by Bobby Liebling. We actually met Bobby and the band at 2009’s Hell’s Pleasure festival (yes, two Pentagrams on the same bill!), and they were really cool and laid back, and apparently didn’t have the slightest problem with us using the same name. However, I must admit that having the same name has caused some confusion here and there (like having a picture of the US Pentagram in the Wacken program brochure when it was us playing). We think and hope that this solution will be accepted by everybody. Our fans in Chile and elsewhere will probably still refer to us simply as PENTAGRAM, but we want to make sure there is no more mix-ups in the future, as we intend to tour extensively with the new album. We just thought that changing our name to something completely different would cause even more confusion rather than preventing it.

Last but not least, although we had decided to give priority to finishing the album and not to play live until it was done, we recently recieved an offer we couldn’t refuse. We are now confirmed for the tenth edition of the Maryland Deathfest to be held at Sonar in Baltimore at the end of this month. We are scheduled to play on Sunday, May 27th at 18:25 on one of the outside stages, in between Morgoth and Saint Vitus. This is going to be our North American live debut and we just can’t wait! Afterwards we will resume work on the album, which we expect to have completed by the end of the summer. Thanks everybody for your patience and ongoing support. You won’t be disappointed!”
– Anton Reisenegger –

“Pentagram from Santiago Chile was one of my most influential bands ever!
…I hope the world will stand back and take notice that it just doesn’t get any better than this!!!”
– Mitch Harris (NAPALM DEATH) –

“Pentagram is Death Metal. I don’t really care if the band themselves ever thought the label suited them or not. Death Metal is about raw power. Not about fancy little scale sweeps on your nice little guitar. Death Metal is not fancy or nice and Pentagram is about as far as you can get from nice – perfect, thank you very much. Crank it up and get hit by some real heavy shit.”
– Nicke Andersson (IMPERIAL STATE ELECTRIC, DEATH BREATH, Ex-ENTOMBED, Ex-THE HELLACOPTERS) –