Real Doom has to be felt. It has to bewail and it has to hurt. Hailing from Lima, Peru, Death/Doom entity MIRTHLESS will release their debut full-length, entitled A Dirge For Your Suicide, on June 1st via Dunkelheit Produktionen.

MIRTHLESS adds a deeply passionate occult mood to their classically-flavored brand of Death/Doom metal, making A Dirge For Your Suicide mandatory listening for fans of ESOTERIC, LOSS, early MY DYING BRIDE and early PARADISE LOST. This analogue-recorded masterpiece is given a 3-panel-digipack including a colored poster (24 x 24 cm) by Dunkelheit Produktionen. The Artwork was made by Erick Neyra (GOAT SEMEN) and perfectly matches the sound of the occult hellish elegies. 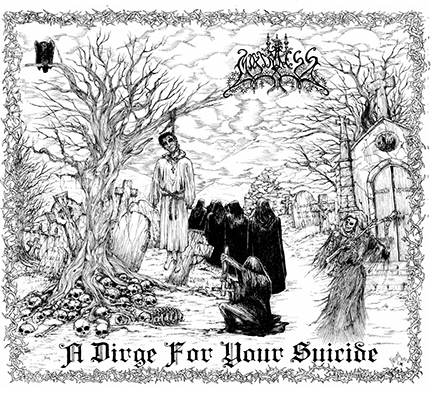 Album track “Pantheon of Disgraces” is currently streaming a this location.

Pre-orders are available at www.dunkelheit.cc. 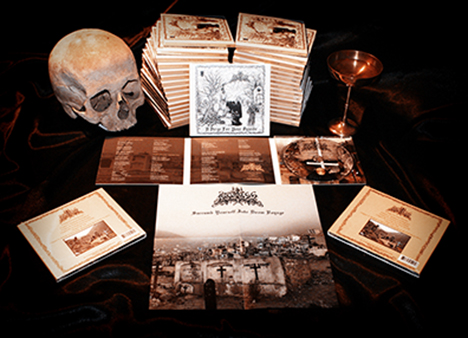 MIRTHLESS emerged in 2003 with the gathering of two sinister souls: Mirthless (Suicide Voice of Doom Kult) and Satyricon (Senile Dementia in Drums), who were inspired to create music filled with despair and darkness. A few months later another fallen soul appeared: Soulless (Mournful Sound of Anguish and Pain) with whom the band composed two sad poems and recorded a rehearsal tape during November and December 2004 called Rehearsal I. This first demo consists of slow and rough music, hailing the old days of doom metal acts. Those 24 minutes of music received rave reviews in the underground and earned MIRTHLESS respect amongst the doom community.

In 2004, the band entered the El Sotano studios to record the Remembrances EP. It contains two odes of melancholy, lasting almost 26 minutes. The hymns of mournful, torturous, insane, sick, suicidal, bleak and emotional Doom Metal leave no hope for the listener, they blacken every day and destroy your soul. Remembrances is an authentic ode about inhuman emotions, prayers and laments. The lyrics and music are reflections and channel of the member’s thoughts, philosophies, raw emotions and experiences. The music captures the essence of the word Mirthless.

In 2009, after several offers MIRTHLESS signed a deal with the Japanese kult label Deathrash Armageddon for a 10-inch MLP. The band entered a local studio to lay down their first vinyl, mystically titled A Las Orillas del Mar. It contains pure sounds of depression! The Doom formula is to follow gloomy, deep, screaming or whispering voice, combined with mournful, heavily distorted guitars and slow drums in the traditional way. 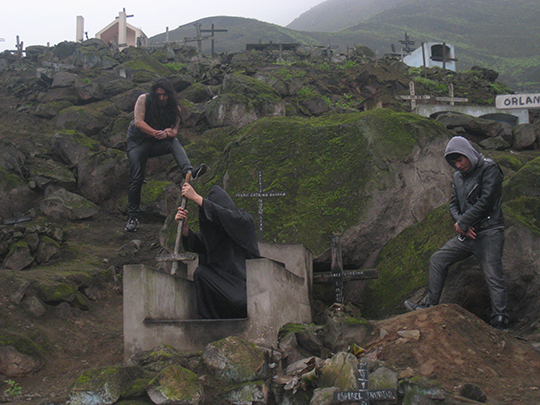 The 10-inch received critical praise in the underground, bringing MIRTHLESS on the radar of Dunkelheit Produktionen, who offered the band a deal. At this time Satyricon quit the band for personal reasons and was replaced by Schizophrenic (Disturbed Mind in Drums) in 2011. He had been living in a mental hospital for a long period. MIRTHLESS soon came to an agreement with  Dunkelheit Produktionen for the release of the long awaited debut album A Dirge For Your Suicide, which will be released in the summer of 2013.

The new album will be released in two different deluxe editions: As 12-inch LP or Digipack CD. Both versions will contain odes of pure remorse. The music is mainly driven by very slow, depressing guitar harmonies and is further characterized by minimal drums, and growled and whispered vocals. The main lyrical themes are personal spirituality, mysticism and depression. There are moments of tranquility in the stream of subconsciousness…