The follow-up to the pile driving, No Lifeguard At The Gene Pool, released in 2005, Evolutionary Miscarriage finds PILLORY expanding upon their signature intricacies. Written, recorded and produced by founding drummer Darren Cesca (Arsis, Burn in Silence, Goratory et al) at his newly-launched House Of Grind Studios in Connecticut during 2013, Evolutionary Miscarriage is centered thematically around the de-evolution of mankind. A physically and mentally demanding listen, Evolutionary Miscarriage brandishes deranged rhythms, maniacal riff torrents, subtle white noise nuances and multi-layered vocals all executed together with near surgical meticulousness, the record’s sharp production allowing each lacerating note to shine while retaining the blunt brutality of its predecessor. 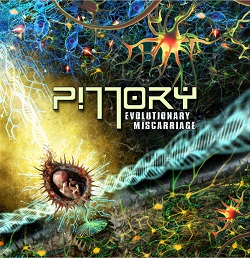 Comments the band in a collective statement: “Evolutionary Miscarriage encompasses in totality what the PILLORY sound is by using different textures and an unbiased perspective to take listeners on a journey. It’s impossible to catch everything on the first listen as the complexity will become more familiar with each new visit. PILLORY‘s sound will suck you in and not let go as it travels through your veins and contaminates your mind.”

Check out an Evolutionary Miscarriage album teaser as well as a three-track album play-through video from Cesca that will make you want to practice more at THIS LOCATION.

Evolutionary Miscarriage will be released via Unique Leader Records on June 10th, 2014.