WORLD TERROR COMMITTEE (aka W.T.C. PRODUCTIONS) announces the signing of Greece’s PRINCIPALITY OF HELL. PRINCIPALITY OF HELL was born out of the subconscious depths of Greek black metal mastermind The Magus (NECROMANTIA, THOU ART LORD, et. Al.) in 2013. Fellow conspirators El (SOULSKINNER, THOU ART LORD) and Maelstorm (RAVENCULT, THOU ART LORD) completed the unholy trinity. This band has one aim, and one aim only: to revive the old black/thrash spirit of the early/mid 1980s of the mighty VENOM, BATHORY, CELTIC FROST, SODOM, and VOIVOD…pure diabolical metal music! The first fruits of this unholy union shall be a 4-way split shared with other leading bands from the Greek black metal scene, and to be soon followed by PRINCIPALITY OF HELL‘s debut album. Release dates, tracklistings, and covers to be announced shortly. 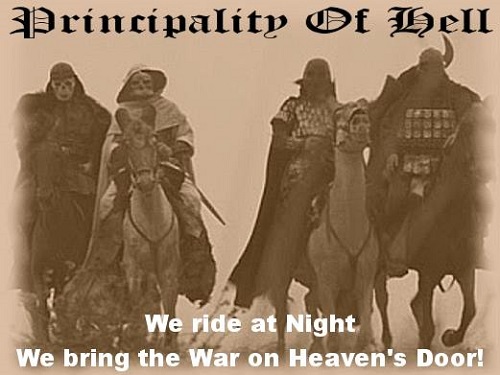