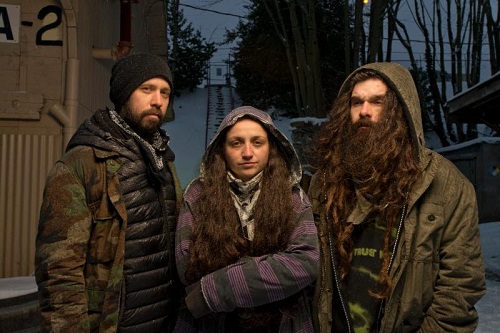 Re-Unvent the Whool, PRIZEHOG‘s third full-length release, is a magnificent, powerful LP; a byzantine labyrinth of impenetrable riffs, crushing dirges, heavy hooks, and warped excursions wrapped up in triumphant progressions made complete with downshifted bellows and dark cries; perplexing and mystifying yet grand, spellbinding, enthralling, and uncannily soulful. It’s a record full of depth, complexity, power, humor, and beauty. Recorded and mixed by Toshi Kasai (Melvins, Big Business, Tool, Russian Circles) at his new Sun Valley studio Sound of Sirens, Re-Unvent the Whool is focused, sophisticated, and masterfully produced to showcase the exquisite but intense interaction within the trio: guitars, synths, and drums push and pull one another as they crunch, crush, whirl, weave, and straight up rock their way through mazes of dynamic and dramatic movements, adding layers upon layers to sculpt mountains of sonic majesty. Pitched-down vocals, at once otherworldly and deeply human, shift between omnipotent bellows, soulful wails, and surprisingly gorgeous chants, elevating the whole enterprise to a whole other level. Re-Unvent the Whool is a truly unique vision of genuine heaviness unlike anything you’ve heard, and bears an equally unique cover painting by New York artist Chris Jehly.

Eolian Empire will let PRIZEHOG out of the cages on March 4th via digital download and 180-gram vinyl LP. The street date will be celebrated early at a hometown record release gala on February 28th at Portland’s The Know, sharing the stage with Thrones and Polst. PRIZEHOG is also currently scheduling a full US tour for May, with those dates to be released in the coming weeks. Preorders for the album are now live at the Eolian Empire fort HERE.