Next year will see the inaugural Progressive Nation At Sea cruise, presented by Sixthman, Del Fuvio Brothers and InsideOutMusic, running from the 18th -22nd February 2014. As previously announced, progressive-rock super-group Transatlantic will take to the stage at this special event, for a grand finale encore alongside the legendary Jon Anderson, where they will play a selection of classic Yes material. In celebration of this, PN14 are extremely pleased to reveal an exclusive stream of Transatlantic’s cover of‘And You And I’ taken from the second disc of the band’s forthcoming album ‘Kaleidoscope’ due out next year.

You can check that out here: www.progressivenationatsea.com/premiere

PN14 mastermind and member of Transatlantic, Mike Portnoy, had this to say: ‘One of the highlights of Progressive Nation At Sea 2014 is certainly going to be the finale of Transatlantic and Jon Anderson joining forces for a set of Yes classics.
To give a little taste of what it may sound like, here is an exclusive sneak preview of one of the bonus tracks from Transatlantic’s upcoming Kaleidoscope CD: a cover of the all-time great Prog classic Yes’ And You And I.
Book your cabins now to reserve your spot on board PN14 to be part of the Prog Event Of The Millennium!’ 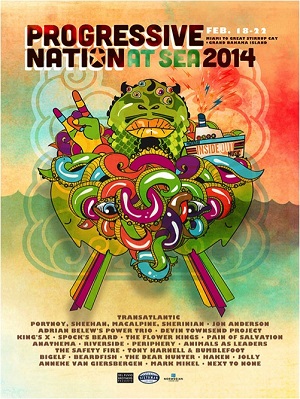 The four-night festival at sea will depart Miami, FL on February 18th, 2014. After spending a day at sea, Norwegian Pearl will head to Great Stirrup Cay, Bahamas for a day of fun on a private island and then depart for Grand Bahama Island, Bahamas, the following day. Guests will arrive back in Miami on February 22nd. Progressive Nation at Sea is an infusion of music and technique that’ll heighten your senses in a way no other vacation ever could! The full line-up for the cruise boasts the musical genius of Transatlantic, PSMS, Jon Anderson, Adrian Belew Trio, Devin Townsend Project, Kings X, Spock’s Beard, The Flower Kings, Pain of Salvation, Anathema, Riverside, Periphery, Animals As Leaders, The Safety Fire, Tony Harnell & Bumble-foot, Bigelf, Beardfish, The Dear Hunter, Haken, Jolly, Anneke van Giersbergen, Mark Mikel and Next To None.

Progressive Nation at Sea begins at $700 per person plus taxes and fees. Prices include entertainment, meals, and access to Norwegian Pearl’s outstanding amenities, including outdoor pool, hot tubs, rock climbing wall, and fitness center. Fans can read more and book their cabin at www.progressivenationatsea.com