Dutch death metal menaces, PROSTITUTE DISFIGUREMENT, in conjunction with the evil-breeders at MetalSucks, are pleased to unveil a new paean of punishment in the form of their latest lyric video for “Glorify Through Cyanide.”

The newest taste of terror, which centers itself on American cult leader Jim Jones, comes off the band’s soon-to-be-released From Crotch To Crown opus. Their first full-length proper since 2008’s mauling Descendants Of Depravity, From Crotch To Crown delivers a maniacal fusion of old-school death metal brawn with modern, technical riff incursions and enough debauched lyrical twists to make even the most deviant of serial killers blush. Metal Injection boasts, “PROSTITUTE DISFIGUREMENTaren’t the kind of band where you’re left wondering what type of music they’ll be playing. As the name heavily insinuates, it’s gory, brutal death metal in the vein of Carcass that will kick your ass up and down the morgue,” while HeavyBlogIsHeavy crowns the record, “a hefty 40 minute slice of honest, no frills aural violence.” Adds Sea Of Tranquility in a 4/5 score, “From Crotch to Crown just crushes from start to finish, and the lyrical content is even more grotesque this time around… a no-brainer for anyone into gore soaked technical death metal.”

Get flattened with “Glorify Through Cyanide” currently playing at MetalSucks HERE.

You can also check out “Crowned In Entrails,” still rocking at Metal Injection, at THIS LOCATION. 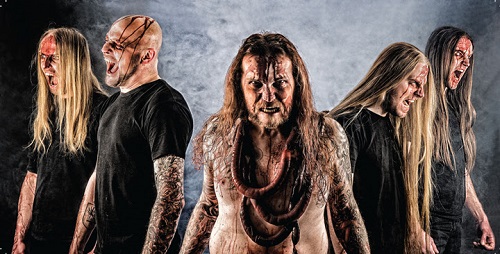 From Crotch To Crown was recorded in multiple locations throughout The Netherlands including Split Second Sound Studio in Amsterdam, guitarist Frank Schiphorst’s home studio in Zwolle, guitarist Martijn Moes’ home studio in Meppel and Final Focus Studio in Tilburg, and was re-amped, mixed and mastered by Yuma Van Eekelen and Bart Hennephof (also at Final Focus). The end product oozes forty-one heinous minutes of the band’s sickest, most instrumentally refined and unapologetically sadistic material to date.

From Crotch To Crown will be released via Willowtip Records on February 4, 2014. Preorder your copy today at THIS LOCATION.