Serbian black metal barbarian PROVOCATOR reveals an art video for the song “7 Storms of Eternal Damnation.” The track hails from the band’s forthcoming debut album, Antikristus, set for release on August 19th via MORIBUND RECORDS. PROVOCATOR comes from the sick & twisted mind of BLEEDING FIST founder Hellscream, Antikristus his vilest and arguably most violent project yet. Across Antikristus, Hellscream conjures from his black-blood cauldron a hypnotic whirlwind of primitive, primal savagery that positively reeks of the ancient ways of black metal. But while reverent of the most diabolical works of Beherit, VON, and Sarcofago, PROVOCATOR imbues its blackout trance with a potent sense of ritualism and devil worship, a crude ‘n’ caustic pulse that aims to either possess or erase – or both. The original vanguard of isolationist black metal, MORIBUND once again delivers the one-man goods with PROVOCATOR. Visual + song proof can be witnessed exclusively HERE. 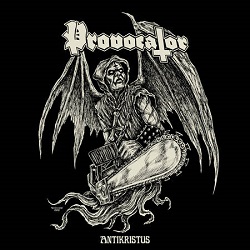 A statement from Hellscream reads: “The story started in 2012 when I started to put together all the old material that I never used for Bleeding Fist and was laying down in my closet for years, so I wrote the first EP, Darkness is Rising, which was released under the banner of Doomentia Records, strictly limited to 300 copies as a 7˝ vinyl. After that release, I was pretty much inspired in that old raw and morbid way of making music, so I decided to start putting together the full-length, which was written in a few days. After that, I booked the studio and recorded the whole album in a day. PROVOCATOR is simply a tribute to the old raw sound of the the first wave of black metal as Hellhammer, Blasphemy, VON, Bathory.”