PSYCHO has been shredding their way through the population since 1981. Formed as a punk band, the material simply grew faster and more extreme until it became the high-speed grind/thrash mutation their extensive discography of EPs, splits and albums reflects, never following current trends, nor trying to make it sound technical. The band’s discography stretches back to 1982 with the release of their debut 12″ 8 Song EP, followed one year later by the Son of 8 Song EP  7″ EP. Three years later they released their debut LP, Hosebags From Hell, two years later the You Love Us… You Hate Us…LP and then four years later the legendary 10″ picture disc LP, Riches and Fame, was unleashed upon the masses. Several EPs and splits with Anal Cunt, Agathocles, Meat Shits, Out Cold, Rot, Nasum and more would drop throughout the ’90s. After a twelve year stretch of silence, in 2008 PSYCHOreleased a double LP collection of early studio recordings as well as a self-titled CD/DVD. Selfmadegod released their The Grind Years compilation CD in 2010, after which the band dropped two limited 7″ EPs before setting up to record their first new LP in over two decades, Chainsaw Priest. 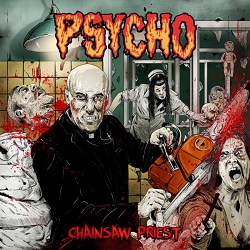 Cranking out seventeen new tracks in under twenty-nine minutes, Chainsaw Priest delivers a lethal dose of rampant, fierce grindpunk of the stripped-down, frantic variety, yet it’s not without its mid-paced calculated killing sprees. Old-school, simplistic and more punk than metal, the tracks PSYCHO delivers here are quite potent in contrast to many of the overproduced and metallic guttural grindcore acts of the modern breed. It’s creepier that way. The album even closes with a scathing cover of the Plasmatics’ “Want You.” Diehards of Agathocles, S.O.B., Unseen Terror, Pungent Stench, Unholy Grave and most stripped and ripped punk/grind acts out there should no doubt tie on a smock and get ready to rock, and rip the guts out of everything in sight to Chainsaw Priest.

Chainsaw Priest is out now on Selfmadegod; stream the whole album RIGHT HERE.