PTSD have finally defined the last details of the new upcoming album “A Sense Of Decay” set to be released on May 20th 2013 via My Kingdom Music and distributed wordwidely. Watch the official album teaser – http://www.youtube.com/watch?v=9aECgQikKdw 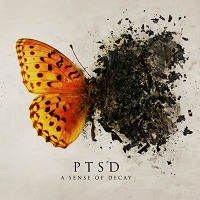 See also a preview of the cover and the definitive tracklist:

Recorded with the presence on drum of MARCO MINNEMANN (at work with Kreator, Necrophagist, Ephel Duath etc.) and mixed and mastered by JIM CARUANA (2 Grammy for Beyonce’s hits “B Day” and “I Am Sasha Fierce” and winner of the Golden Globe and Academy Award for Top Gun theme “Take My Breath Away”, besides producer for mainstream stars like Aerosmith, Lenny Kravitz, Black Eyed Peas), the album “A Sense Of Decay” will contain 12 songs for about 60 minutes of passionate and introspective but at the same time aggressive and articulated Alternative Post Metal including a remix performed by Forgotten Sunrise and a wonderful cover of the ANASTACIA’s anthem “Heavy On My Heart” performed with the new drummer Marco Lancs.

Here’s a short summary of what is happened during the last months of hard work as seen by Henry Guy, mastermind and singer of the band:
“The last two years have been very hard for us. After “Burepolom” release and touring in Europe with EVERGREY we entered in a sort full immersion recording the new album “A Sense Of Decay” in our own studio. Since the very first days we had clear the sensation that we had in our hands a great album and day by day we have seen it growing and emerging like a new amazing creature and the sensation became a reality.
There were incredible moments that for a young almost unknown band like PTSD will be memorable. The first contact with MARCO MINNEMANN, one of the greatest drummer of the world, and his enthusiasm were incredible. He recorded all the drum parts for the album and we have also met him during his Italian tour, speaking about our projects and the possibility to play with him in a future tour!
Then the great opportunity we had entering in touch with one of the greatest producer and engineer of the world JIM CARUANA who mixed and mastered the album. He is a great and absolutely professional man with a huge experience and did this work just because he was amazed by our sound.
At the end like the icing on the cake My Kingdom Music’s boss gave us a present with a magnificent cover realised by Colin Marks that have just worked with band like Strapping Young Lad, Exodus, Suicide Silence, Nevermore etc
So what other could I say… This album means a lot for all of us, it costs a lot in terms of time, money and sacrifices, we have worked very hard and I think it’s time for PTSD to do the big step towards a more international audience, because “A Sense Of Decay” is not an album like others!”.

Hot News: Anastacia hit “Heavy On My Heart” as performed by PTSD now on video!

Hot News: Waiting for PTSD “A Sense Of Decay”…