Rising from the filth-lands of Uddevalla and Ljungskile, Sweden, NECROCURSE was spawned in the year 2004 with the musical love for all things brutal and ugly. Consisting of members from Nifelheim, Necronaut, Runemagick, ex-Deathwitch and ex-Swordmaster to name a few, the band is now ready to incur utter chaos and total annihilation with an upcoming full-length debut album to be released in 2012.

In an official statement from the band: “The time has come for the Death Metal Rebels to rise from the grave, and forge a full album release of the Metal of Death! Necrocurse are proud to announce the collaboration with Pulverised Records for the upcoming yet untitled album. The upcoming release will be recorded during the coming winter and include at least 9 tracks of insane morbid death…”

Pulverised Records label manager Roy Yeo commented: “Having NECROCURSE on our roster was an easy choice, for the fact that the musical style and direction of NECROCURSE fitted perfectly to what Pulverised Records is all about; quality and authentic Death Metal. We knew immediately that the band badly needed a proper full-length album to further showcase their devastating brand of Swedish Death Metal at its finest! 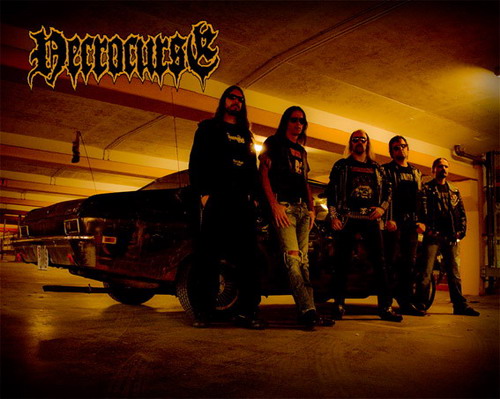 NECROCURSE – Grip of the Dead