Canadian black metallers RAGE NUCLÉAIRE have finished recording their brand new full length album, which will be titled ‘Black Storm of Violence’. This follow-up to their ferocious debut ‘Unrelenting Fucking Hatred’ will be released on the Season of Mist Underground Activists division on July 18th.

Regarding the new album, RAGE NUCLÉAIRE state: “…And the angel of light said:”Let there be more killing, more hatred, more war and more violence”, and there was begotten a second RAGE NUCLÉAIRE album. And there came a time when no good remained in the world, when chaotic evil met lawful evil, and it was called ‘Black Storm of Violence’. Now you die… ”

RAGE NUCLÉAIRE’s debut ‘Unrelenting Fucking Hatred’ is still available on Season of Mist’s e-shop, as well as at the band’s official Bandcamp page. Artwork and tracklist of the first album are shown below: 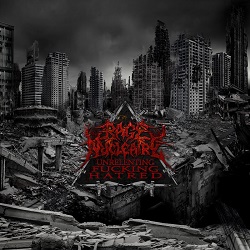 1. Violence Is Golden
2. Hunt with Murderworms, Sculpt with Flies
3. The Gift of the Furnace
4. Fields of the Crucified
5. Endziel
6. The Sorrow Children at Mourningside
7. 30 Seconds in the Killhouse
8. Unrelenting Fucking Hatred
9. The Gallows and the Black Coffin
10. The Feeding Habits of Homo Horriblis

Confidential excerpt from case study ADL 1107-RN6 on subject: RAGE NUCLÉAIRE. Subject was never actually born. Instead, Subject’s component parts (please refer to Component Parts listing below) including former CRYPTOPSY figurehead Lord Worm were assembled by Alvater, sometime in AD 2000, for the purpose of directing their aggression outwards, which now becomes imminent with their debut “Unrelenting Fucking Hatred”. Subject claims to be under influences ranging from early EMPEROR and IMMORTAL, to ANAAL NATHRAKH and MYSTICUM. There are most certainly others, but these are not named. Subject’s problems derive from primary preoccupations including firearms and genocide (“30 Seconds in the Killhouse”), universal pornocracy (“The Feeding Habits of Homo Horriblis”) and flies. Secondary obsessions include burning (“The Gift of the Furnace”) and swine. Subject feels an especially virulent loathing for all humanity. A cognitive-behavioral analysis concludes that Subject’s expressional proclivities include bonesaw guitars, punishing rhythms, bombastic keyboards, revoltingly inhuman vocals, and an orgiastic array of ghastly samples. The diagnosis reveals Subject is violently homicidal, suicidal, genocidal and vindictive, and can usually be found in an aggressive state of fury. Warning: RAGE NUCLÉAIRE is extremely dangerous and maybe harmful to others. Approach “Unrelenting Fucking Hatred” only with caution and respect!